Third update: You can now watch the video – it comes with the following warning: “THIS VIDEO HAS BEEN IDENTIFIED BY EPILEPSY ACTION TO POTENTIALLY TRIGGER SEIZURES FOR PEOPLE WITH PHOTOSENSITIVE EPILEPSY”, and is mostly made from footage of the Watch the Throne tour:

Second update: Posters in Shoreditch – via Vice – indicate that the screening / pop-up shop / whatever it is will be at Child of the Jago.

Update: It’s not on at Village Underground. The accepted story now appears to be that it is a video screening, but there’s no chance of Jay-Z appearing. Kanye “may turn up”. 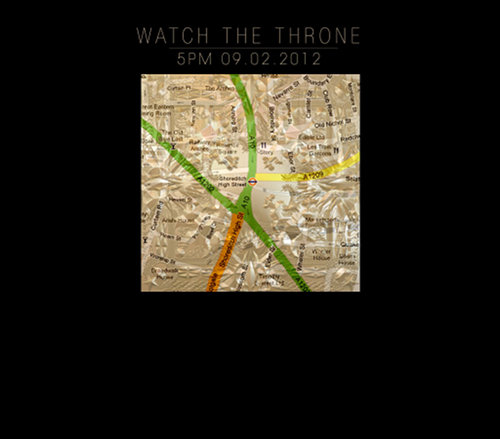 The above cryptic map has been circulating this afternoon, suggesting that hip-hop’s favourite moderm-day megalomaniacs might be up to something at 5pm near Shoreditch station.

There’s plenty of speculation as to what might be going down, but nothing’s confirmed as yet. It could be a gig – if the duo aren’t averse to being mobbed by hipsters – or perhaps a pop-up store like the one which appeared in New York for Watch the Throne’s release last year. The story we’ve heard, and the one that seems most likely, is that it’s a screening of the video for new single ‘Niggas In Paris’, apparently at Village Underground, though there’s also talk of it being broadcast on a billboard on the high street. Let’s hope it doesn’t rain.

If you’re nearby, it’s probably worth heading down just to satisfy your curiosity. More information as we get it.