Meet Lil Jabba. He’s a footwork producer, and a painter. He’s based in Baltimore, but he’s an Australian Citizen. He’s the maker of SWiSHeR, an extraordinary mini-album that we were first made aware of when one of Jabba’s most slippery, infectious tracks, ‘Raiders’, was featured on Patrice & Friends’ FACT mix. It would be fair […] 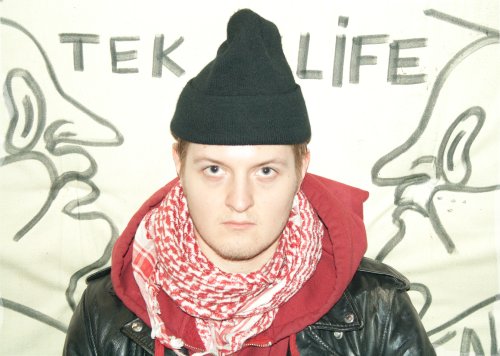 He’s a footwork producer, and a painter. He’s based in Baltimore, but he’s an Australian Citizen. He’s the maker of SWiSHeR, an extraordinary mini-album that we were first made aware of when one of Jabba’s most slippery, infectious tracks, ‘Raiders’, was featured on Patrice & Friends’ FACT mix. It would be fair to say he’s piqued our interest.

FACT’s Tom Lea got in touch with Jabba to find out what inspires his beats, and his canvases. “You can’t just pump out a banging juke joint,” he was sagely advised. “You gotta let it cook, learn the recipes, then you bang ’em out.”

There’s not a lot of information about you on the internet. What’s your background?

“Well, along with feelin’ slippy – and getting my beats materialized – I’m a painter, I go to art school in Baltimore. I live that cavernous life, that ‘Tek life, I also rep a biker gang called the Scraper Boyz.”


“I paint big, mythical scenes, mythical characters in oil…it’s what I envision my life to be beyond the veil of reality.”

How did you start making music?

“I took a ‘music lab’ class in high school, my teacher Gary got me on the right path – I’ve been making beats for about 8-9 years, but only seriously in the past few.”

You’re from Australia originally. Do you consider yourself Australian?

“I was born in Australia but spent little time there. I moved around a lot as a youngling; I lived in Paris for most of my early life, only speaking English to my parents, then moved to NYC, where I went to middle and high school. Now I’m painting down in Baltimore. I’m still an Australian Citizen, I have a lot of pride, and my whole family, excluding my parents and bro, still reps Australia, out in Perth and Jamberoo.” 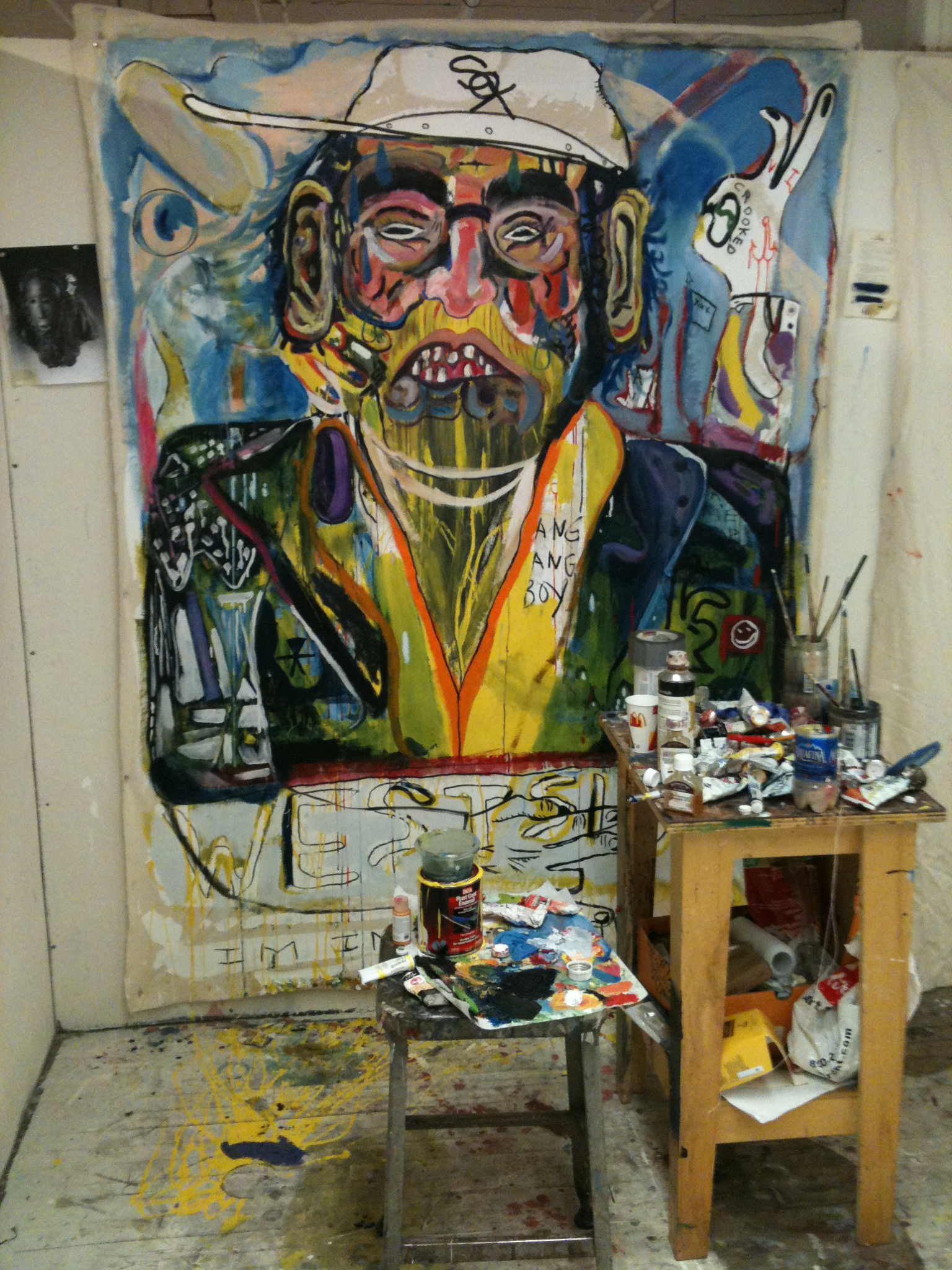 What do you paint?

“I paint big, mythical scenes, mythical characters in oil, generally at least six feet tall, six feet wide – it’s what I envision my life to be beyond the veil of reality, I just paint what sticks with me down to my core. Most recently I’ve been working on a painting of a bunch of goons all huddled around a glowing map, some freaky cave-dwellers surrounding a camp fire (two different versions), a conquistador, a man lazing on a steamy beach in a hammock, two French revolutionaries circa 1795 wearing Chicago starter jackets in a sewer – huddled around a legless Creature from the Black Lagoon, my family dog George, ogre heads, my friend Clara sitting in a very sinister chair, two soldiers looking off a cliff into a foggy sunset, a group of spelunkers exiting a cave, and a footwork battle.”

Oh yeah, footwork. What was it that got you making it?

“I caught sight of Walacam vids, various YouTube connections. I was initially a lot more familiar with Detroit sounds and dance styles, but became obsessed once I had heard the sounds coming from Chicago-side. I did a lot of research, got to know the older sounds, the house tracks from the late 80s onwards, then I guess subsequently moved through time, landing upon and discovering the contemporary incarnation of juke and them footwork joints. It was a beautiful moment when I heard my first speedy tunes, the rhythm and pace was invigorating.”


“You can’t just pump out a banging juke joint, you gotta let it cook, learn the recipes, then you bang ‘em out.”

Is there much of that stuff happening in Baltimore? Footwork still seems quite a Chicago-specific phenomenon.

“Nah, I’m the only cat in Baltimore doing anything of this sort, but I got my homie Jonny Blaze into it recently and he’s been making some pretty solid tracks. Of course there are a lot of really dope producers of electronic/club music down here but it’s mostly club or analog noise, drum-pedally stuff. Warehouse warbles. I still believe juke is in its essence Chicago-based to the fullest, but there have been a few promising producers popping up around the country, and around the world. It took me a long time to wrap my brain around the music, and it’s taken a lot of focus to be able to comfortably produce without feeling like I’m just some goon amateur or something.

“You gotta feel the soul, the undulations, and the waves: you gotta study the footworkers, understand the rhythm of the moves. You can’t just pump out a banging juke joint, you gotta let it cook, learn the recipes, then you bang ’em out.”

Your tracks are pretty twisted, at times reminiscent of an Actress or a Patten. Did you mean to make such weird music?

“Man, I go about it like a painter. A splotch here, a splotch there. I want to create a locale, an atmosphere – I want all my tracks to tell their own tales, like paintings. One aspect of music composition I prefer over painting is its time-based fluidity. I can fiddle around for hours on tweaking minute sound details without any over all detriment. Sometimes with a painting you’re left staring blank. Music can be more plastic, more malleable, less physical, more mental. You spend hours experimenting without being precious. As far as being weird, I’m usually in a pretty slippy mindset; tribal, ravenous; meta; deep.”

There’s a lot of really neat sampling going on in your work – do you start with these when you’re building a track, or do they come later?

“Nah, I always bang on the drums first.” 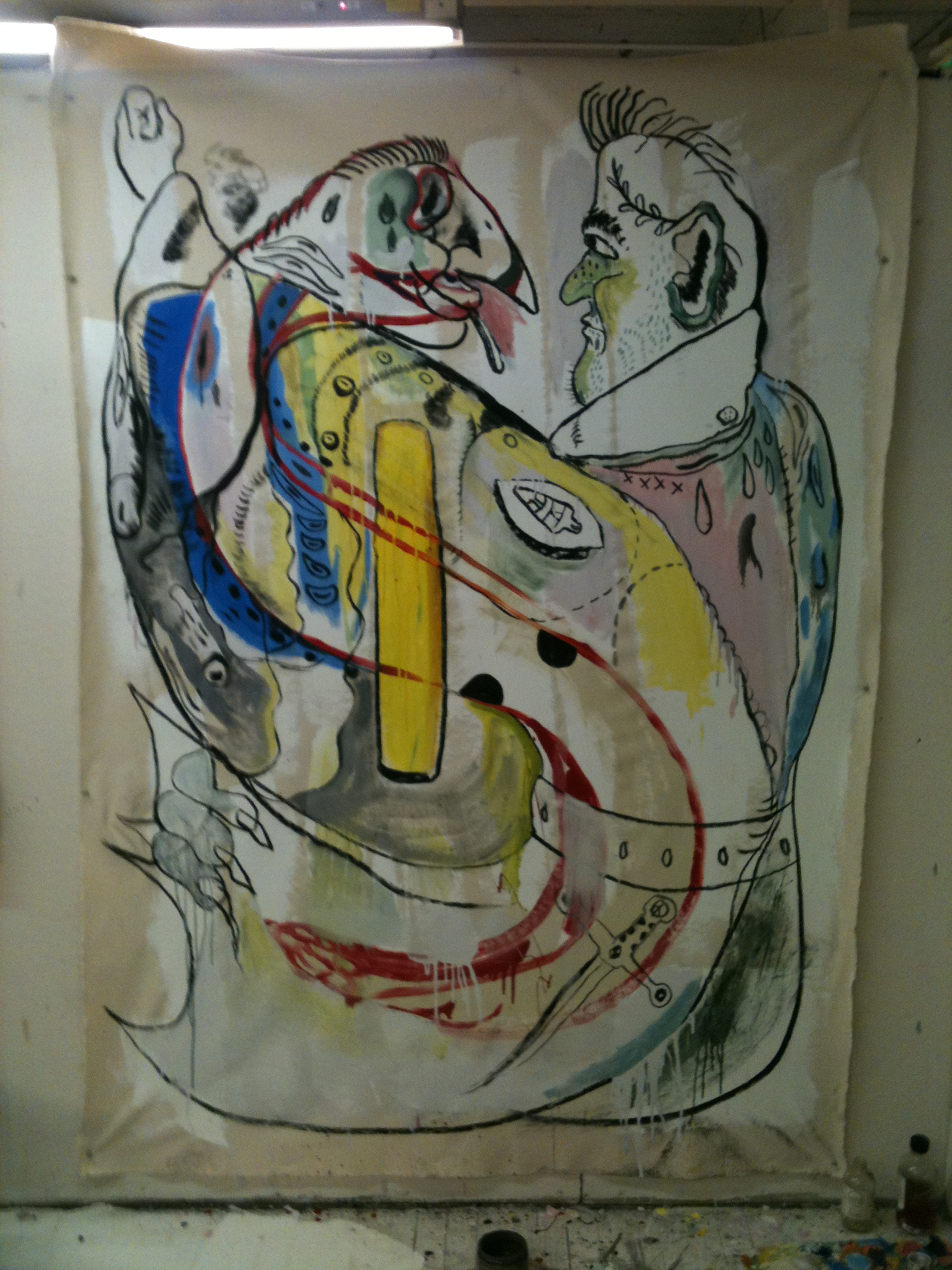 As reductive as it sounds, do you make tracks for the headphones, or for the clubs?

“You can go ham to the tunes, but also let them become a life rhythm, a kind of background track to your fast-paced life. Some of mine, I always wanna make sure the dancers could theoretically get down, but I also want the thinkers to pick up on the intricacies and appreciate the trip I take you on. I bounce back between introversion and extroversion, so sometimes I’m feeling more rambunctious, sometimes I’m feeling that leaaaaan.”

When you talk sbout them being a soundtrack to a fast-paced life, do you mean something specifically inner city? Because if I’m honest, your tracks kind of remind me of nature a lot: forests, caves and undergrowth. Maybe that’s just me.

“Nah, that’s not quite what I was getting at; I meant fast-paced just as in, well, we’re all living pretty fast-paced lives these days – in the city, in the country, in the grotto, in the meadow. We can communicate faster, so we exist faster I guess. I just think speedy tunes are good to listen to in your headphones – or speakers – while you’re commuting or exercising or riding an elevator or whatever, sitting in your studio drinking an espresso, thinking about what colour to put down on your new oceanscape or what type of 909 hat you wanna include in your track, reverb…


“Yeah, I like forest noises, I live in a cave after all – the undergrowth, the saplings, the fauna…”

“Yeah, I like forest noises, I live in a cave after all – the undergrowth, the saplings, the fauna… the fungus, moss, insectivores, et cetera. Man I love cave life, I can sit and watch the non-troglodytes meander around my neighborhood, they don’t even know where that banging bass comes from, sometimes people make eye contact with me through my window and I show them my third eye – it’s nice. I’m all about standing in the rainforest and hearing the deafening cacophony of exotic frogs’ barks, bug hisses and rattles. I love how mystical and unconcerned nature is with us; it just presents us with all this stimulus and doesn’t care if we take it in or not.”

What inspires your music? Specific artists, aesthetics, something else?