The 1985 debut from Charles Hayward’s post-This Heat ensemble strives to outpace the march of time. 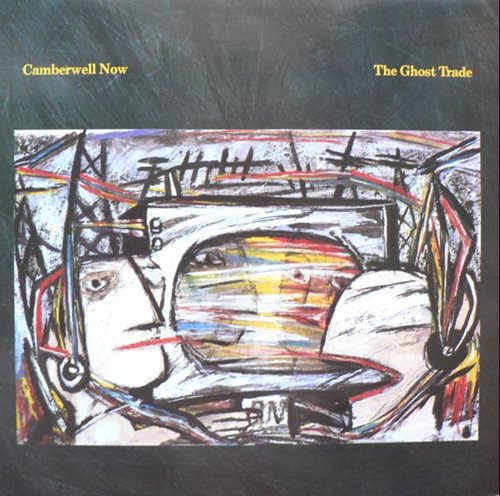 When This Heat finally fizzled out in 1982, it was always going to be fascinating what would emerge from the ashes. That band’s songs made a virtue of pointing in three, five, ten different directions at once; their hybrid structures and ear for collage made for music that could go any way at any time. Bassist Charles Bullen released a wonderful EP of lithe freak-funk under the Lifetones moniker. Gareth Williams – This Heat’s resident ‘non-musician’ – went on to work with Mary Currie as Flaming Tunes, producing tape-damaged folk that was equal parts wyrd and wired. For the most part, it would fall to Charles Hayward, This Heat’s drummer and de facto leader, to try and preserve the antic energy of the mothership.


It’s not certain whether this is music working for or against the production line.

Camberwell Now – originally the triumvirate of Hayward, bassist Trefor Goronwy and This Heat’s tape engineer Stephen Rickard – were borne out of Hayward’s desire to get “different people coming together, making something out of all these energies”. The trio’s first release, 1983’s nautically themed Meridian EP, was a gently melodic collection of modern-day shanties. But it was their 1985 single ‘Daddy Needs A Throne’ – seven minutes of careering stop-start rhythms, over which Hayward sneers “just you wait until your father gets home” – that cleared the ground for what was to come. Later that year, with the line-up expanded to include saxophonist Maria Lamburn, Camberwell Now released The Ghost Trade: a six-track LP that shows the band at their most violently percussive, their most politically engaged, their most breathtakingly exciting.

Opener ‘Working Nights’ establishes the mood. Over one of Rickard’s tape-manipulated drones, a remarkably insistent drum pattern explodes into life. The drums skip, lurch into halftime, convulse, descend into hysterics – it sounds as if Hayward is trying to tear himself free from the vinyl. Around the four-minute mark, the track slips into a lumbering groove, augmented by shivers of fidgety guitar and spindly bass. Hayward’s voice, papery and demotic, has always been hard to love, but its colloquial character works well amidst the chaos. The lyrics point to capitalist disaffection – “I am a cog/We are a wheel” – but the animal fury is anything but indifferent.


Capitalism and mediumship are both kinds of ‘ghost trade’, and Camberwell Now’s sound – at once mechanical and unhinged – has a foot in both.

Crucially, ‘Working Nights’ also sets out the record’s political stall. On the one hand, the vocal nonchalantly acknowledges the way capitalism disembodies its actors, converting them into endlessly exchangeable units of labour. On the other, the track’s percussive frenzy resembles an exorcism: an alarming physical disruption of the established order. Capitalism and mediumship are both kinds of ‘ghost trade’, and Camberwell Now’s sound – at once mechanical and unhinged – has a foot in both. Ultimately, it’s not certain whether this is music working for or against the production line.

If The Ghost Trade has a go-to move, it’s the unannounced shift in tone. Throughout the record, squalls of percussive noise suddenly ease into lockstep grooves. ‘Sitcom’ repeatedly changes tempo and time signature; the lyrics dart from bromides (“Georgie Porgie pudding and pie”) to warnings (“wait a minute – something’s wrong”). The effect is deliberately artificial, like the canned laughter referenced by its title. ‘Speculative Fiction’ is probably the best example of the band’s interest in disjunction. Over a punk-funk rhythm and a bubbling morass of saxophone and bass, the band read out a list of absurd slogans (“there’s a force field on the front lawn”/”newscaster’s face turns green”). Weird sonic details rise up from the mix: clattering plates, misplaced tom-thuds, accidental crashes, crashing accidentals. Gradually, the voices become almost entirely lost in the gurgle of the low-end. It’s disco, detuned and détourned – a Saturday night fever dream. Here and elsewhere, it’s not difficult to spot the influence of techniques like Williams Burroughs’ ‘cut-up’ (Camberwell Now have actually shared liner note space with Burroughs; both contributed recordings to Myths #1: Instructions For Survival, the inaugural release on the Sub Rosa label). But there’s also something distinctly proggy about these ambitious, precocious pieces.

This spirit of adventure is further emphasized by The Ghost Trade’s use of field recordings and tape manipulation. In interviews, Hayward has described how, as a boy, he once improvised along to a thunderstorm raging outside his window. Rickard’s tapework has a similar effect. An ever-present spectral hum, the ersatz rustle of wind, adds an extra dimension to Hayward’s compositions. ‘Wheat Futures’ centres around a processed tape wail, occasionally enhanced by multitracked accordions and accretions of bagpipe. The title track ends with five minutes of synthetic drone, bells twinkling over the howl of the tapes. Even a relatively straightforward number like the Gang-Of-Four-esque ‘Green Lantern’ is made strange by Rickard’s rich sound palette. Out of ribbon, he conjures thunderstorms.

The defining traits of The Ghost Trade – its conflicted treatment of industrialization; its fascination with randomness and change; its sonic variety – make for an invigorating listen. But the record’s real charge comes from its near-relentless sense of urgency. If a ghost is a moment where the past intrudes into the present, The Ghost Trade is a record obsessed with how to keep history at arm’s length, to outpace the march of time. It’s there in Hayward’s demonstrative band handles (This Heat; Camberwell Now), and it’s scrawled all over The Ghost Trade’s lyric sheet. Anxiety of influence (“we pledge ourselves to dead men’s schemes”); nostalgia (“remember watching the Royal Wedding together?”); the embarrassment of age (“conveyor-belt shadows of our former selves”) – all show Hayward taunting, or being taunted by, the past. Even ‘Wheat Futures’, the gentlest moment on the record, instructs us to “pay attention – I’ll say this just the once”. All in all, it’s a record that frets about its own place in history. As Hayward says: “we can only blame ourselves for this sickly ghost trade/Action turns to gesture, ideas are soon clichéd”.


It’s a record that frets about its own place in history.

To contemporary ears, one of the most interesting things about The Ghost Trade is how eerily prescient it sounds. The driving beat and sax-skronk of ‘Speculative Fiction’ would slot effortlessly onto a record by The Rapture. Similarly, almost all of the music here could have been lifted directly from the antsier end of the Battles catalogue. The impact of The Ghost Trade on these bands is hard to quantify. The band were somewhat ignored in their day, and their works rarely crop up in current artists’ recommended listening lists. Rather than a blueprint, then, it might be better to think of The Ghost Trade as a blotting pad; a palimpsest of bold idea upon bold idea, synthesising influences in ways which have inevitably been repeated, and in some cases, are yet to be repeated.

After The Ghost Trade, the band released one more record – 1986’s comparatively glossy Greenfingers EP – before eventually disintegrating. The bulk of their extant recordings were subsequently compiled on 1992’s All’s Well. Ultimately, nothing in Camberwell Now’s slim catalogue has endured quite like their solitary LP. Nowadays, there’s no shortage of musicians trading in ghosts: beatsmiths channeling snatches of curdled R&B; the hordes of Tri Angle try-hards; popstars hawking the signature sounds of eras long gone. The Ghost Trade, by contrast, is a record that defiantly dodges the claims of the past, and, in doing so, confidently pre-empts the future. Now that’s spooky.