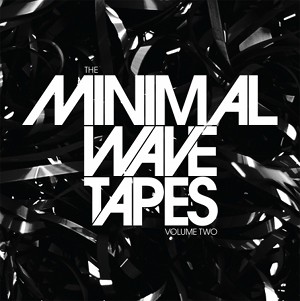 By now, perhaps, some of the immediate reactions to Veronica Vasicka’s Minimal Wave project will have cooled; as expertly summed up by Timothy Gabriele, the premise of broadly re-labeling and re-presenting various music from a near-history had some initial backlash, as well as a predictable hype, that came with the success of its first official compilation (as referenced in our recent interview with Vasicka).

However, despite any creeping monopoly that may be attributed to the name, it is difficult to see Minimal Wave as an archival project driven by anything other than a genuine passion for and knowledge of the kind of artists it (re)presents. It is therefore encouraging to hear the latest of the Minimal Wave compilation albums, The Minimal Wave Tapes 2 achieve a very respectable and genuinely exciting result all over again.

Vasicka has previously stated that the compiling element of this album was looser and more spontaneous, and that has been captured well. At a satisfying 14 tracks long it showcases a range of music that share different stylistic points but diverge in different directions at once. The opening five tracks – Hard Corps’ ‘Dirty’, In Trance 95’s ‘Presidente’, Philippe Laurent’s ‘Distorsion’, ‘HSTA’ by Das Ding and ‘What Happened to You?’ by Subject – all share a wild, monstrous, industrial energy, and their selection makes for a thrilling introduction to the earnest endeavours of the musicians of the period. They are exhilerating calamities, expertly controlled swathes of electronic percussion, relentless pumping synthesizers and vitriolic vocals.

Ohama’s ‘The Drum’ marks a pivotal point within the selection, a Kraut jam coloured with a touch of humour and an unrestrained Italo influence. From here the compilation takes an odd and satisfying turn into a similarly bright selection: Geneva Jacuzzi’s ‘The Sleep Room’ dips the listener in a spring-reverb drenched medicated surf jam; through Antonym’s ‘Cinnamon Air’ it is not difficult to hear the period that Dopplereffekt derived much of his slow, arpeggiated electrofunk influences from; and Ruins by ‘Fire’ gives a harsher take on the same pop- and disco-inspired punk made famous by Talking Heads.

‘Animals From Outer Space’ by Ende Shneafliet then seems to initiate another change in programming direction, this and the remaining tracks falling more squarely into a kind of No Wave punk canon. Of these, In Aeternam Vale’s  acidic buzz-drone mantra ‘Annie’ and searing, stuttering, soul-tinged closer ‘Theme’ by Aural Indifference are remarkable.

As far as historic compilations go, this is an undeniable belter, successfully capturing music with a very particular energy worth celebrating. While other archivists of the period and culture may naturally take issue with the umbrella grouping of what is indeed a diverse array of  material, it would be extremely hard to deny that the tracks selected do not capture and summarise something quite quintessential. If that leads such collectors to gain more personal recognition for their own hard work, and for unexpected opportunities to explore the possibilities further it can only be a fantastic thing.