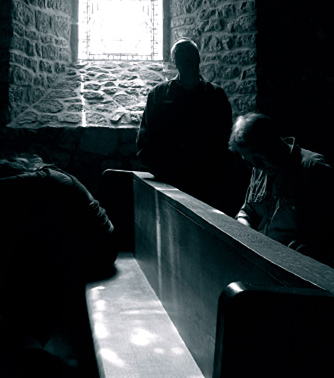 Eyeless In Gaza, the English duo best known for their uniquely atmospheric post-punk releases in the 1980s, are set to release a new record on Downwards.

Downwards was founded by Karl ‘Regis’ O’Connor and Peter ‘Female’ Sutton in the early 90s. Though it remains synonymous with the caustic, industrial “Birmingham sound” techno produced by Regis, Surgeon and Female in the first decade of their careers, Downwards’ catalogue reflects the catholic taste of its principals: the recent DO 10″ and 7″ series, for instance, has given an outlet to shoe gaze and dark wave bands like Tropic of Cancer, Pink Playground, Six Six Seconds and The KVB. We shouldn’t be too shocked to find it opening its gates to admit the emotive folk of EIG.

Of course, it’s not a random connection at all; Regis and Eyeless’s Martyn Bates go back a long way. Speaking to FACT a couple of years ago, O’Connor reminisced about the Birmingham underground of the early-mid-90s that was centred around Mick Harris, former Napalm Death drummer turned dub terrorist.”Tony Burnham [who has recorded on Downwards as Antonym] was doing his Soft Watch experimental bible-cum-directory – a legend in its own lunchtime. Also people like Martyn Bates and the journalist John Everall became part of this micro-scene that passed through Mick’s house.

“By the time Mick had introduced me to Tony Child [Surgeon], this odd collection of people – who were all working in different areas of music and at different points in their careers – had swelled to include Mark Farmer, who ran the Plastic Barry fanzine and Richard Harvey, a local pornographer.”

He recently added: “Martyn was there at Mick’s house when we listened to the first Surgeon demo… so I guess he was always part of it.”

Almost twenty years later, Eyeless In Gaza are ready to release their first record on Downwards, one which will doubtless reinforce their cult status and help introduce their remarkable body of work to a new generation. Butterfly Attitude, due out in March, is described as a “specially-commissioned sister work” to the band’s recent full-length album, Everyone Feels Like A Stranger. You get five tracks on the 12″, all exploring the predominantly acoustic, folk-oriented sound that has been EIG’s preference for some years now, with Bates’ pungent lead vocals cast in minimalist but muscular arrangements of guitar, percussion, harmonica, keyboards, bass, melodica, organ, banjo, ukelele, steel pans and “morse code”. As ever, Becker and Bates conjure a precious ambience out of, and around, their performances: particularly resonant are ‘Dust’ and ‘The Day Began’, the latter recalling the unique sound design of classic Eyeless albums like Drumming The Beating Heart. 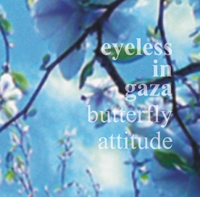