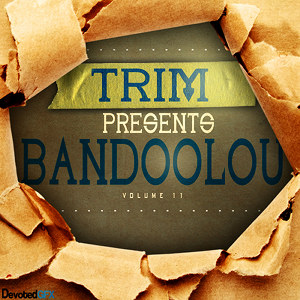 ‘Bandoolou’: a word meaning to pinch, to pilfer, to pull a fast one. Trim – one-time Roll Deep member and habitual beef-maker – fits the description well, and he spent 2011 on particularly mischievous form. Last year’s ‘I Am’ single set Trim’s distinctive voice against a playful, tappity-tap drum track, spotted with hydraulic synths and a cheesy sax line. Even more cheeky was Pritch and Trim’s ‘Stereotype’ single – a track which was cartoonish, jaunty, more Beano than Kano. And yet, despite that title, Bandoolou is less playful than those records: it highlights his strengths, but doesn’t always play to them.

Trim’s voice, as ever, stands out. Where many of his compatriots trade on a sort of syllabic duck-and-weave, Trim’s flow is lumbering, unpredictable, off-kilter. His pipes, smoked and blasted, are instantly recognizable and commanding. Like Riko, who features on the album, his voice is an instrument rather than just a medium – as his repeated references to “phlegm all over tracks” suggest, the physicality of his voice is at the forefront. The ‘Freestyle’ at the heart of the record proves the point: whereas his cousin Nico Lindsay turns out a familiar litany of socially conscious grievances, Trim grumbles about how his “polluted thoughts are having thoughts of their own”. His vision is dark, personal, and frequently strange.

Bandoolou also showcases Trim’s talent for operating counter-intuitively. The chorus of the title track is a recording of Trim ticking off somebody for singing along with his flow. Is he addressing a rival rapper – or is he chastising his fans? Phrases like “I spit what they spat out” or “Out of order, yeah, I’m bang out” show Trim warping syntax into unexpected shapes. On the fantastic ‘Lord Of Lords’, he resorts to the line: “I’m saying things how they rhyme”, before descending into free association. The moment on ‘Motto’ where he rasps the ‘Eenie Meenie Minie Mo’ rhyme recalls Ghostface’s thrilling repurposing of Mary Poppins on ‘Buck 50’. More than any of his fellow Londoners, Trim recalls Sensational: another rapper who marries a languid flow with an eye for deconstruction. On some of these tracks, however, he settles too readily for competence rather than brilliance. ‘DAT’ – whose tabla rattle brings to mind that fantastic ‘F-Off’ single – shows Trim performing the old grime trick of repeating the same phrase ad nauseum. It’s not a bad device, but Trim’s voice sounds so much better when untethered, moving in his own orbit.

The production, unfortunately, doesn’t always match up. As with most contemporary grime long-players, variety is order of the day. Tempo and tone change on a track-by-track basis; continuity is spurned in favour of promiscuity. On ‘No For An Answer’, producer Rudekid refused to take just that, mashing up conventional grime rhythms with fragments of old skool rave and cries of ‘Bass!’ – the effect might best be described as nuclear-fusion music. ‘Hate Me’ uses the same synth palette as your next road-rap producer, but sets it to a driving go-go beat. And yet only the Pritch-helmed ‘Lord Of Lords’ or ‘DAT’ provide convincing matches for Trim’s voice. And some beats are real missteps: the sub-Roots Manuva pomp of ‘Intro’ simply feels dated, whereas the ‘Niggas In Paris’ reboot that closes that album sounds like a cheap facsimile of the original. Whereas Wiley’s Evolve Or Be Extinct took this experimentation into the realms of absurdity, Bandoolou doesn’t totally lose its focus – but the pell-mell approach produces a mixed bag. A key line on Bandoolou is one of the record’s earliest: “I’m in a chair fit for a king, but don’t deserve the throne cos I ain’t fit for a prince”. It’s unclear whether he’s pitching for greatness, or spurning it, and the same is true of Bandoolou.