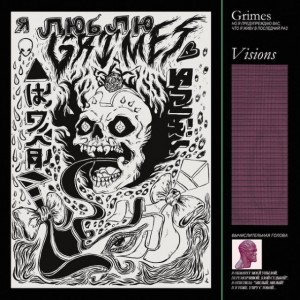 It seems like Claire Boucher has been, in some quarters at least, misrepresented over the last couple of years, and it’s about time we critics banished any vestigial traces of the descriptor “lo-fi” from our tongues and keyboards. In interview, the Canadian musician has admitted to feeling quite embarrassed about the variable production values on some of her earlier records – which isn’t to say we should be embarrassed about them too, just that clearly, for her, mulchy tape distortion was a means rather than an end in itself.

And the end is probably Visions. With the move to 4AD – an inspired one, given her evident love for the ‘verbscapes of the Cocteau Twins et al – Grimes is nudging up against the glass ceiling of the indie underground, and this album has ambitions to match. Gone, or at least concealed, are the extensive Dune references of Geidi Primes and the just-slightly grating Witch House hieroglyphics scrawled all over last year’s Halfaxa, replaced with a more ambiguous kind of esoterica less likely to alienate those for whom the Tumblrsphere is an impenetrable realm.

This still isn’t quite a crossover pop hit in the making, though. It’s bloody weird. Boucher hits the ground running with ‘Genesis’ and ‘Oblivion’: the latter, bouncy electro-pop driven by a squelching, mechanistic bassline that positively oozes cheekiness, the former the album’s undisputed highlight with a killer hook poised between the earth and somewhere else. But both seem to be held at arms length, cloaked in an icy, high fidelity sheen that infiltrates the entire album.

It’s a unique sound, but one that has a tendency to conceal the subtler nuances of Boucher’s productions. Listen harder, though, and you’ll find she’s got a knack for exploiting the porous border between producer-manipulator and singer-performer, showing no queasiness about fucking with her own voice – there’s the pitched-up chipmunk-diva stylings of the gratifyingly industrial ‘Eight’, an improbably acrobatic refrain in ‘Be A Body’ that could’ve been the rough sketch of a Jamie XX remix, the disorientating reversed babbling in ‘Nightmusic’. It’s evident that a lot of craft has been invested in these tracks – the dense tapestry of interlocking vocal parts in ‘Visiting Statue’, say, is deceptively fluid – but often it sits below the surface, avoiding grand gestures of pop-virtuosity.

And for all the focus on vocals, it’s often hard to pick out lyrics in the billowing clouds of reverb, though that’s part of the charm; it’s easy to imagine Boucher’s multitracked voice, like so many celestial beings up in the firmament, enunciating universal pop themes of love, lack and loss in a language we don’t quite understand. But as time wears on you start to feel that things are a bit too ethereal, as ideas fall short of solidifying into concrete hooks and structures begin to feel just slightly aimless, as if drifting untethered rather than propelled firmly forward.

Perhaps there’s a charm to it – pop-as-vapour, brilliant but insubstantial – but it does get fatiguing after a while. Things are redeemed somewhat with penultimate track ‘Skin’, whose meditations on the closest of bodily contact find Boucher at her most intimate.   Over a detailed, 90s IDM-ish lattice of percussion, she pushes the reverb on her breathy, slightly lisping voice into overdrive, as if we’re opened out onto some vast synthetic space from the comfort of a bedroom. It’s an odd disjunct – the almost scandalously close and warm against the icily, surreally distant. But in a way it neatly sums up Grimes, the bedroom producer who wears her DIY aesthetic proudly on-sleeve whilst keeping her eyes fixed firmly on the the most plastic regions of chart territory. When it works, it makes for gloriously contradictory pop – it’s just a shame that the formula isn’t a little more consistent.