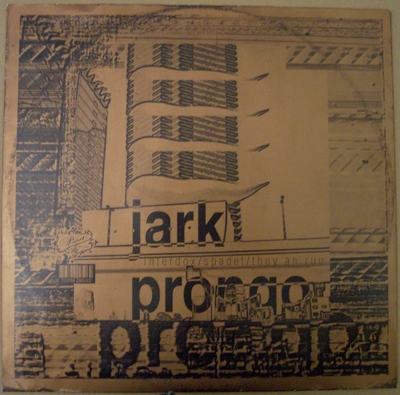 The first thing to say about Jark Prongo is, well, what a name. I have no idea what it’s a reference to, or what its etymology is. What I do know, and love, is that Jark Prongo – the Dutch duo of Gaston Steenkist and Rene her Horst – came to use ‘jark’ as a verb. Their studio mantra was “let’s go jarking” – meaning, let’s create freely, without boundaries.

The second thing is: what tunes. Steenkist and Horst’s early productions as Jark Prongo, mostly released through their own Pssst imprint in the mid-1990s, constitute some of the most punchy and engrossing techno ever made.


“This is some of the most punchy and engrossing techno ever made.”

High-church, deep-space musicality learned from Detroit? Check. A wild, breakbeat-fuelled energy borrowed from Belgium and the UK? Check. Chicago jack-factor? Check. A deep, intuitive grasp of the psychedelic that could only come from regular first hand experience of chemically-enhanced rave abandon? Check. Jark Prongo’s tracks really move, really take you places. As such, they’ve always been the switched-on DJ’s friend, now as before – indeed, in recent years Jark Prongo cuts have been reissued by A.R.T.less and Innervisions, two labels whose principals’ owe them an extraordinary debt.

However, the cheapest place to start is – ironically – with the original pressings. Things happened quickly back then. In 1993, having spent barely two years helming the highly influential Fresh Fruit label, Steenkist and Horst grew bored of conventional house structures, and found themselves looking to early jungle and breakbeat for fresh inspiration. In 1993-94 they released four Jark Prongo 12″s, two apiece on Fresh Fruit and their bespoke JP Records imprint, but it was when they moved to their own newly founded Pssst Music stable that the project really caught fire.  The ‘Interdox’ 12″ of 1994  is, for me, the neatest encapsulation of their brilliance. The title and lead track is a love letter to the most symphonic, sci-fi-minded Carl Craig, E-Dancer and Metroplex productions from the same era; crucially, though, and unlike so much similarly-oriented European techno being made back then, it sounds empowered, not cowed, by its influences, and possessed of  a rude energy that betrays its makers immersion in the breakbeat-oriented musics of the time.


“They sound empowered, not cowed, by their influences.”

The EP’s centrepiece, though, couldn’t be any less rude; in fact, it’s about as elegant as they come. ‘Spadet’ was picked up by Kevin Saunderson for his classic X-Mix: Transmission From Deep Space Radio set, and was one of the tracks featured on A.R.T.less’s 2008 remaster, and deservedly so: it’s an undimmed techno masterpiece, its robust kicks supporting a shimmering, chiming super-structure of bells, while sighing synth-pads and a treacle-thick bassline come up from beneath, promising to allay all conceivable pains and woes. ‘Thy an ruu’ hasn’t aged quite as well, but it’s arguably the most original thing on the record, boasting faintly junglist drum programming and marvellous corkscrew synth arpeggios, climaxing in a low-slung break reminiscent of Richie Hawtin’s oft-lauded La Funk Mob remix.

I advise anyone who feels they’ve exhausted the magic of mid-90s techno, or anyone who thinks European producers of the time couldn’t hold a candle to their Detroit teachers, to investigate the catalogue of Jark Prongo. You won’t be disappointed.