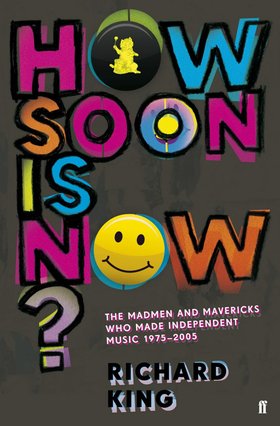 Faber & Faber are set to publish a new book celebrating “the madmen and mavericks who made independent music” in 1975-2005.

Entitled How Soon Is Now, Richard King‘s 624-page study looks at the labels that have driven independent music over the past 30 years, and the characters behind them.

The spotlight falls not only those imprints synonymous with the DIY culture that emerged in the post-punk years – Factory, Rough Trade, Mute, 4AD, Beggars Banquet et al – but also those that came up in their wake, among them Creation, Domino and Warp. The Smiths, Autechre, Depeche Mode, Happy Mondays, Sonic Youth, Primal Scream, Teenage Fanclub and Cocteau Twins are but a handful of the bands who figure in King’s at once sweeping and richly detailed narrative.

The author is well appointed to comment on independent label business and culture: he founded Planet Records in Bristol, sharing office space with Revolver Records store, which was part of the Cartel, Rough Trade’s infamous distribution network. He also played guitar in Flying Saucer Attack, and in 1994 joined Domino to work in A&R, which he has continued to do since “through various degrees of formality”.

How Soon Is Now will be available in paperback on April 5, and can already be pre-ordered here. You can read more about it at King’s dedicated blog. Faber’s recent music-related publications include Simon Reynolds’ Retromania, Greil Marcus’s The Doors, Rob Young’s Electric Eden: Unearthing Britain’s Visionary Music and Jarvis Cocker’s Mother, Brother, Lover: Selected Lyrics. Notable upcoming titles include James Fearnley’s Here Comes Everybody: The Story Of The Pogues and Will Oldham on Bonnie ‘Prince’ Billy, edited by Alan Licht.