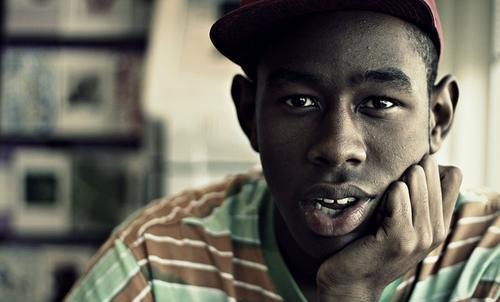 Last December, Odd Future figurehead Tyler, the Creator was arrested for vandalism after a show at Hollywood nightclub the Roxy.

The rapper, who signed to XL last year and released his second album, Goblin, reportedly “destroyed an electric soundboard belonging to the venue”, almost causing a mini-riot as “the crowd exiting the venue became angry and rushed into the street, towards deputies”, forcing police to call for back-up.

TMZ report today that Tyler has already paid $8,000 to the venue in an attempt to make good of the situation, and is scheduled for a meeting with a hearing officer for the District Attorney, who will apparently report that he also pay for the investigation costs. If Tyler complies, the DA will not file criminal charges.

In other Tyler news, his third solo album Wolf is set to come out later this year, and he played a starring role in recent Odd Future video ‘Rella’, as a centaur in Rick James get-up. He’s also been in the studio with on-form Three 6 Mafia member Juicy J, as well as Kanye West and Toro Y Moi.