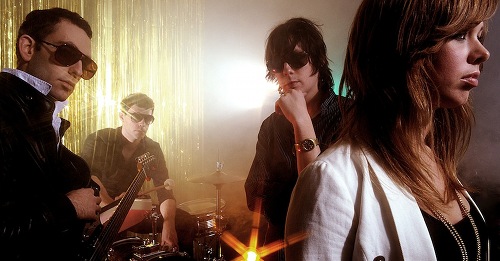 New York outfit Chromatics have gifted us another louche cut from their long-awaited sophomore record, Kill For Love.

‘Candy’ is the fourth track to emerge from the band’s continually delayed full-length. The four-piece – who will feature on the recently announced vinyl edition of the Drive soundtrack – clearly haven’t lost their affection for groggy disco. The music doesn’t so much strut as lumber, with Johnny Jewel’s synth work sparkling dimly over an achingly slow disco groove. Ruth Radelet’s lyric pitches for intimacy, but her dead-eyed delivery puts any amorous impulse on ice; the effect is like Nico presiding over a rollerdisco.

As with previous tracks from the record, Alberto Rossini is on director duty. The video presents all the signifiers of glamour – bright colours, twinkling lights, glossy fashion snaps – but smothers them in woozy visual effects. ‘Candy”s subject-matter might be about something sweet, but there’s an air of malevolence throughout song and video alike.

Kill For Love is due out later this year via Italians Do It Better.