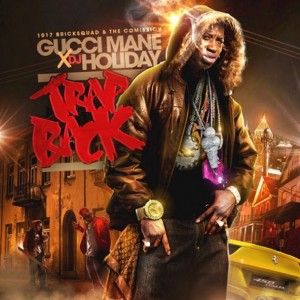 Gucci’s newest mixtape (in a series of roughly two billion) doesn’t really bring “Trap” back, of course. Trap – as a rap style – has actually never been away, and has arguably never been more overwhelmingly popular than it is right now. Strictly speaking, a trap is southern slang for a crack-house. Trap rap, on the other hand, is a term used mainly by lazy music critics like me to refer to a style of production pioneered by mainly Atlanta-based producers like Shawty Redd (Young Jeezy’s go-to guy of old), Drumma Boy and Zaytoven (Gucci’s go-to-guy of old), often allied to southern rappers rapping about trapping (that’s selling coke and crack). And right now in rap music there’s something like a trap epidemic going on.

The trap rap sound has become over-saturated in recent years, and these days really needs big characters and voices to sell it as something fresh and exciting. Gucci, with his diamond Bart Simpson medallions and facial tattoo of an ice-cream shooting lightning, is definitely one such character, and one such voice. The title Trap Back is probably more of a reference to Gucci’s 2005 debut album Trap House than anything (opening track ‘Back In 95’ looks back fondly to a time when “junkies didn’t recognise my face” and “dope fiend willy used to finger fuck my rims”). The implication is clear, if unintentional: this tape isn’t about bringing trap back – it’s about bringing Gucci Mane, and with him his unique take on the trap, back.

In his day-to-day life, Gucci has been trapped in a number of self-destructive cycles for years now, not least the drug addiction he routinely refers to on Trap Back and his unfortunate habit of getting fairly regularly incarcerated. His latest spell inside ended only last December, and so he’s “back” on this mixtape in a very literal sense. For Gucci fans, however, the most exciting thing about Trap Back is that it shows that Gucci must currently be feeling creatively, as well as physically, free. Continuing the encouraging trend he exhibited on last years Writing On The Wall 2 – tellingly, a sequel to another classic Gucci tape of yore – Gucci really sounds like he’s coming back to life here, musically at least rising out of the drugged stupor he increasingly seemed to be sinking into a couple of years ago.

Detractors of Gucci will tell you that not only does he sound retarded (the slurred, mangled words, sometimes incomprehensible to the uninitiated) but that he is retarded (the childishly simplistic lyrics, the nursery-rhyme repetitions, the rote thug-rap topicality). Neither of these accusations hold much weight, or at least they don’t when Gucci is on top form. Unfortunately he hasn’t been on top form for the last few years, and has sometimes sounded as lacklustre as the detractors say he is. On last year’s Ferrari Boyz album, collaborating with Waka Flocka Flame, Gucci often sounded authentically – as opposed to stylishly – sloppy. He wasn’t leaning into his woozy, mushy accent to help fashion unique-to-Gucci rhyme and flow patterns, as he is capable of doing. Instead he was relying on that voice, on its distinctiveness and flavour, to prop himself up. He didn’t sound engaged, and Flocka, as lyrically unsophisticated as Gucci but firing on all cylinders delivery-wise, blew Gucci’s sleepy murmurs out of the water with his roided-up berserker energy.

It’s telling, therefore, that Waka’s screamingly boisterous guest-spot on Trap Back (on ‘Walking Lick’) comes off as over exerted, really a bit try-hard when compared to Gucci’s casually confident rhyme-spinning. Gucci’s laconic, barely-bothered flow, as exhibited on parts of Ferrari Boyz, still appears here, but now belongs to a small arsenal of flows, cadences and vocal emphases that Gucci rifles through at will, often according to the demands of the beat he’s rapping over. A great example of this is the Southside-On-The-Track produced title track, on which Gucci’s first verse is delivered in a calm half-time flow, and his second in a breathless double-time, slurred but precise, managing to accentuate the build-and-drop bass-assault of the beat, its dynamic of tension and release. On ‘Quiet’, another Southside produced highlight, Gucci’s energy and clarity starts off low, but rises in tandem with the steadily crescendoing instrumental.

Gucci works brilliantly with beats. Of course, it helps that when those beats are brilliant, as they almost all are on Trap Back. A production team that includes Mike Will, Drumma Boy, Zaytoven and Sonny Digital provide Gucci with a shining array of colourfully melodic but bass-heavy trap beats, tailor-made for Gucci’s unique combination of goofy exuberance with barely subdued psychopathy. In a sense, Gucci has created not only his own style of rapping but his own style of production to go along with it; like Gucci himself, these beats provide an inventive, weirdly playful twist on the trap template. It makes perfect sense, therefore, to hear Gucci rapping about washing his “stash with Ajax” over a trunk-shaking version of the theme tune from Tetris, on ‘Get It Back’.

As rapping over Tetris might suggest, above all else, Trap Back mostly succeeds because its fun. Gucci’s lyrical themes are completely conventional (he’s got a lot of money, he’s fucked a lot of honeyz, etc.) but so eccentrically and extravagantly depicted that they end up seeming exotic and cartoonish. His “ten kilo” earrings are the “same size as cantaloupes”. His watch is as “cold as Siberia”. His pockets are so cash-packed they “look like thigh-pads” (or “as fat as Kelly Price”). He’s paints in bright, vivid colours – he has a “Red watch with the red chain / (My diamonds on they period)”. His cars have “Peanut Butter” interiors (or “red guts”), and “chocolate” exteriors. His bladder pisses “a lot of pink” (cos that lean he likes to drink).

The imagery Gucci uses transforms him and the world around him, turning the bleak imagery of the trap into a child-like collage (he has “more bricks than kids playing Matumbo”), and his doubtlessly difficult life into a Looney Tunes pantomime. On ‘North Pole’ Gucci depicts himself as a pipe-bomb wrapping Saint Nick, complete with pump-action toting “elves” in toe: “Red Falcons hat, all red hoodie / Santa Claus of the city, bag full of goodies”. Whatever else this jovial description of drug-dealing can be called, it certainly can’t be called dull, particularly in the context of current rap music, where – aesthetically speaking – the trap can be as much of a dead-end for rappers as a trap house is for a junky. Trap Back is by no means the best mixtape Gucci’s released (its probably not even in the top half billion), but its the best he’s done in a long while and proves that, while far too many rappers out there are doing what Gucci’s doing, there’s nobody else out there doing it anything like the way he does it.