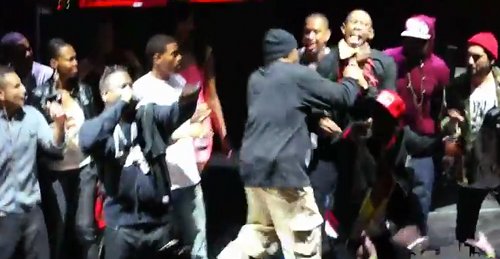 Tyler, the Creator can’t seem to win when it comes to live shows.

Following an arrest for vandalism at a Los Angeles show – and subsequent £8,000 apology – the Odd Future bastard appeared on stage at a recent Gucci Mane concert that also featured V-Nasty and Soulja Boy, and found himself on the receiving end of a fist round the neck courtesy of a member of Gucci’s security.

Skip to 3:20 in the clip below for the action, and watch out for Tyler’s expression. Oh, and no comments about how you’d rather it had been V-Nasty – that doesn’t fly on International Women’s Day.

It’s not the only Tyler-related jape to backfire in the last week. As Pitchfork report, a furore was caused in Wales, Wisconsin when a lyric from Tyler’s Goblin was found graffiti’d on the wall of a school. A particularly visceral line from ‘Radical’ – “Fuck school, burn shit, kill p30pl3” – was found painted on the wall of Kettle Moraine High School; the feds were called in, and the mischief-maker has subsequently been arrested. Stay in school, kids.

In other Gucci news, his new mixtape Trap Back is his best in ages. Read our in-depth review here.