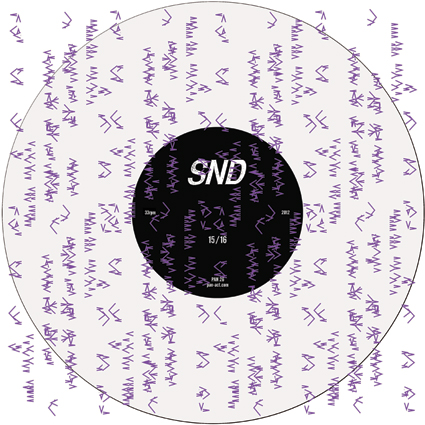 To be accurate, it’s a split EP: SND’s composition ’10/16′ occupies the entire A-side, while the B-side is given over to three tracks from NHK aka Japan’s Kuhei Matsunaga and Toshio Munehiro; earlier this month Matsunaga released the terrific Dance Classics Vol.1 EP on PAN as Nhk’koyxen.

SND – the duo of Mat Steel and Mark Fell – have operated at the intersection of sound art and advanced techno for 16 years now, with albums for Mille Plateaux and Raster-Noton, as well as an iconic self-released vinyl series and a formidable FACT mix, to their name.

The split EP (PAN26) is a limited edition pressed on 140g white vinyl, housed in a silk screened PVC sleeve with artwork by Kathryn Politis and PAN chief Bill Kouligas.