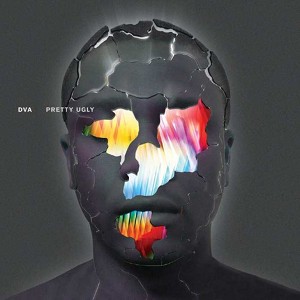 A moment. You’re now about two minutes in to ‘Polyphonic Dreams’, the third track on Leon ‘DVA’ Smart’s much-trumpeted debut album Pretty Ugly. Against a driving syncopated beat, a wave of bleeps and bloops has been vacillating back and forth for some time. Suddenly, out of time and out of the blue, we hear what sounds like Smart accidentally cycling through the presets on his Microkorg (S.E. Hit, Settings 5-8, patch fans). At first listen, the effect is jarring, almost inept – how have these four, misplaced staccato stabs survived into the final mix? Showing your workings isn’t a new trick, of course: how many stridently lo-fi records have begun with the crackle of lead meeting jack? But if a gesture like that makes a political statement, Smart’s little trick is much more obscure. Is it a gag, perhaps?  A moment of infelicity? An error incorporated into the pattern? This miniature incident, and the muddied motives behind it, holds the key to Pretty Ugly‘s successes, and also to its shortcomings.

Pretty Ugly is an album in thrall to the whispers of machines, and Smart’s interest in digi-gurgle borders on the festishistic. Opener ‘Reach The Sun’ boots up with a computerized hiss-and-crackle, a motif which subsequently gusts through the record like wire-woven tumbleweed. As the rubbery synth-lines twist and curl amidst a mass of indistinct voices, the effect is anything but sun-kissed, and thrillingly artificial for it. ‘Bare Fuzz’, meanwhile, uses a tribal UK Funky beat as a backdrop for all manner of electronic experiments. Whirrs, sirens, cranks, prangs – in a way, Smart’s methodology recalls that of first-generation tinkerers like Raymond Scott or Barry Gray. Much of Pretty Ugly’s sonic palette fits the bill of what blogger-cum-musicologist Adam Harper has described as “alien sounds”: ostensibly non-musical moments which, smuggled into more conventionally musical forms, take on melodic value. The digital fiddling is occasionally annoying, but, more often than not, it comes over as enchanting.

Smart’s clear attraction to (retro-)futurist sounds is matched by his own stylistic adventurousness across the record. Throughout the album, you get plodding march rhythms (‘Where I Belong’), waltz-time (‘Madness’) and clipped syncopation (‘Just Vybe’). ‘Pretty Ugly’, practically three songs in one, is an helpful test case. The silvery synthwork and rhythmic irregularity brings a familiar brand of West Coast beatmaking to mind, but there’s also a very clear debt to Funky that keeps things closer to home. The track shifts from major to minor; from orderly drum-patterns to unquantized Xerox machine throbs. Cornelia’s vocal is ambiguous: when she describes breathing “in through the nose, out through the nose”, it’s not clear whether she’s in a state of meditative calm, or attempting to stave off a panic attack. The same goes for ‘Eye Know’: whether “I’ll be watching you” is a sensitive or sinister sentiment depends entirely on your personal disposition (a point visually reinforced by the track’s good-cop-bad-cop video).

When Smart’s compositional restlessness works, it really works. ‘The Big 5ive’ – which probably isn’t a tribute to the late 1990s boyband – is space-age and swoonsome, an inter-planetary quadrille in 5/4. ‘Eye Know’, meanwhile, is simply breathtaking. Everything great about Smart’s work as DVA – his skewed rhythmic sensibility, his ear for shifting structures, his maximalism – deliquesce perfectly on the track. To these ears, it’s not only the best thing here, but also the most effective electronic slow-jam since Flying Lotus’ ‘Tea Leaf Dancers’. And yet, as with many albums that dart from style to style, there are moments where things miss the boss. Take ‘Just Vybe’: serviceable UK Funky, compromised by Gilles Peterson friendly platitudes about “sweet feeling” and striving to “reach the sun”.

That last gripe points towards the album’s principal failing. Considering how guest-heavy Pretty Ugly is, some of the vocal tracks here substantially diminish their source material. Vikter Duplaix’s appearance on ‘Madness’ – “you keep pushing me away with all of your drama and all of your pain” – offers only anaemic neo-soul by numbers. Muhsinah’s banal chorus on ‘33rd Degree’ – “you’re wasted, I’m sober” – is more N-Dubz than Hyperdub, and it definitely sucks some of the gravitas out of an otherwise fairly ingenious track. But the worst offender is ‘Why You Do’. Singer A.L. tells a jaunty story of catching her boyfriend in flagrante with another man, and does so with a strident disregard for lyrical finesse: “Oh my gosh, is this really real? / He’s been seeing a man, don’t know how to feel”. It might be aiming for high-end melodrama (or even the endearing loopiness of Trapped In The Closet) but the result hews closer to Late Night Hollyoaks. Perhaps it’s curmudgeonly to censure DVA and co for having a bit of fun, but his unwillingness to edit his contributors makes some pretty stupendous instrumentals sound, well, a tad stoopid. A lot of these tracks can speak for themselves; you something wonder why Smart bothered drafting in interpreters in the first place.

In some ways, Pretty Ugly brings another Hyperdub record to mind, namely Kode9 And The Spaceape’s 2011 full-length Black Sun. Like that LP, Pretty Ugly is a well-programmed, rangy collection of off-kilter dance music, frequently sabotaged by some preheated vocal contributions (note: nothing here is quite as winceworthy as The Spaceape on his worst behaviour). If this album is intended as a noncommittal grab-bag, then Smart’s severely underselling himself; if he’s pitching to do something progressive, then the flimsier moments compromise the mission. Pretty Ugly is occasionally tender, sometimes facetious; thrillingly mechanical, let down by human voices; frequently adventurous, often injudicious. Like that moment we started with, it’s an album that’s pretty and ugly in roughly equal measure.