A little-known classic of poisonous New York hip-hop, lurking on the soundtrack of Larry Clark’s Kids (1995). 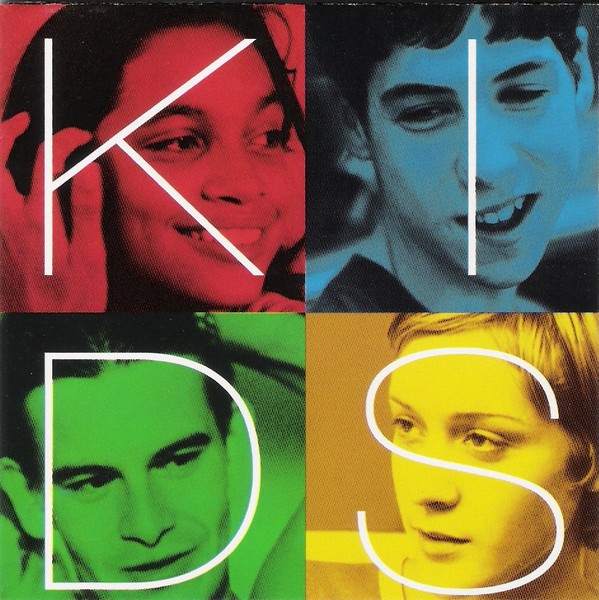 Larry Clark’s Kids made a huge impression on me, as I dare say it did on most of us who were teenagers – or thereabouts – in 1995.

By the time I got hold of a VHS copy of the film, off some pimply reprobate at school, I was 14 or 15 years old and practically dying of curiosity (I’d borrowed Showgirls from the same pimply reprobate a few months previously, which gives you an idea of the cheap thrills I was seeking at this stage of pre-broadband life). The halo of controversy and moral panic surrounding Kids was enormous – everyone I knew had heard about it, though few had actually seen it – and of course I couldn’t wait to steep myself in the gratuitous scenes of sex and violence it promised. Having spirited the tape home, I waited until my parents were out one night, licked my lips, and jammed it into the VCR.


What I experienced wasn’t the titillation I’d been hoping for; it was more a kind of violation.

As the movie unfolded on the TV screen before me, what I experienced wasn’t the titillation I’d been hoping for; it was more a kind of violation, which on subsequent viewings cooled into a kind of disgusted fascination. Kids was a case study in human abjection, and even equipped only with the wonky moral compass of a pubescent boy I could see that its lead character, Telly (Leo Fitzpatrick) was a reprehensible sociopath, not a role model.

Something, though, made it hard for me to not to put Telly – and his similarly wretched pal Casper – on a pedestal. It wasn’t their obvious and unflinching joie de vivre, it wasn’t the alcohol they imbibed or the drugs they smoked, it wasn’t their self-assured shoplifting and turnstile-jumping or even the pristine skatewear that they wore. No, it was the music. Telly and Casper’s increasingly irresponsible exploits in heat-stricken New York were soundtracked by some of the most attractive, evocative music my young ears had ever been exposed to.

I immediately ordered a copy of the soundtrack, and while I waited for it to arrive I watched the film at least a dozen more times, zoning in on specific sequences so that I could drink deep on each tantalisingly short, beat-driven cue. When the CD finally arrived, I was even more excited than when I’d got hold of the film; I put the disc into my Discman (about the size of a sandwich toaster, if memory serves me well) and prepared to have my mind blown. I’d been longing for this moment.


Where the fuck was the real soundtrack?

Silly me. I had no idea that the CD soundtrack for Kids differed substantially from the music used in the final cut of the film, to the extent that they had only four or five tracks in common. The CD was an original score by The Folk Implosion – Lou Barlow and John Davis – plus a smattering of other tracks which I didn’t recall featuring in the movie at all, like Slint’s supremely ominous ‘Good Morning, Captain’. I could appreciate that Barlow and Davis’s score had some majestic moments (for example ‘Jenny’s Theme’, beautifully deployed in the movie as Chloe Sevigny’s character, diagnosed with HIV, wonders the streets trying to get a handle on her dreadful situation, and the similarly haunting ‘Raise The Bells’, which follows the climactic, catastrophic rape scene) as well as some rather more mawkish ones (‘Natural One’, which was released as a single and hasn’t aged at all well). But whatever. Where the fuck was the real soundtrack? Where were all those impossibly slouchy, smoked-out hip-hop joints?

Flustered and frustrated, I referred to the end credits, fast-forwarding to the soundtrack listings. Crooklyn Dodgers, Jeru The Damaja, Erule, O.C., Brand Nubian, Artifacts…why were none of these guys on the CD? Instead, there was just one hip-hop track featured, by a group I’d never heard of before, and have barely heard of since: Lo-Down.

The Lo-Down track was called ‘Mad Fright Night’, and even through the red mist it didn’t take me long to realise that it was special. Some 15 years later, I’m happy to declare it one of the best rap tunes ever to have come out of New York or its environs.


‘Mad Fright Night’ is pure poison, scraped from the gutter.

Very little is known about Lo Down. Two MCs, Chew and Rapture, with apparently no form elsewhere, at least not under those names – amazing really, given how distinctive their flows are. Two producers, Izfoh (also known as Iz Foh) and G Lounge, again with no known prior or subsequent work under those names. Interestingly though, the writing credit on the Kids CD goes to Jonathan Hoffman, who was a founding member of Downtown Science and later producer of solid singles for Ten Thieves and Bash Ton. The track was engineered by one Don Elliot, whose other credits include albums by Da Bush Babees and All City. I have no idea what the precise nature and extent of the individuals’ contributions were – were Izfoh and/or G Lounge aliases used by Hoffmann? I don’t think I’ll ever know, and I’m happy for it to remain a mystery.

Lo Down released just two 12″s, both on their own independent Grifter Recordings imprint: ‘Fright Nights’ and ‘Instruments of Chaos’, the latter featuring the version of ‘Mad Fright Night’ that appears on the Kids OST. Both platters are strong throughout, and are now incredibly rare – you’d be hard-pressed to get hold of a copy of either for less than £40. 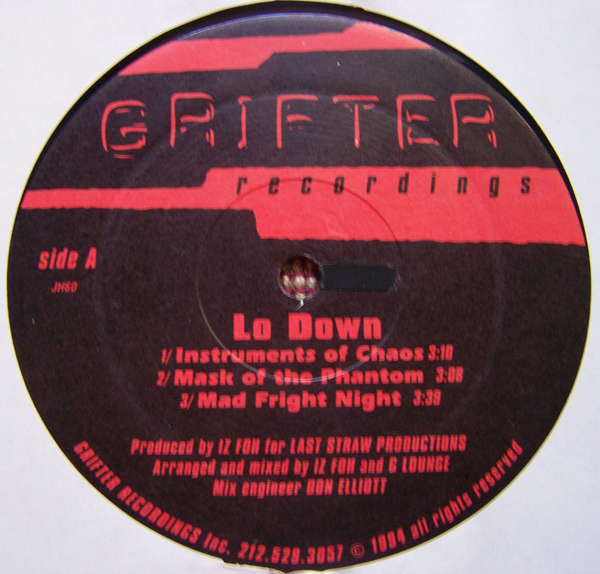 There have been countless rappers who’ve spouted lyrics more vile and vindictive than what Chew and Rapture spit over ‘Mad Fright Night”s chilling 3-minute duration, but I can think of few who sound so frighteningly believable. Unlike so many other purveyors of gangsta extremism, Chew and Rapture don’t make clowns of themselves, they just sound truly nasty. There’s none of the humour of, say, Method Man’s torture-talk to be found here; ‘Mad Fright Night’ is pure poison, scraped from the gutter – lo-down indeed. .

It’s not really horrorcore in the Flatlinerz or Gravediggaz tradition; their language isn’t quite fanciful enough for that. Though Rapture and Chew delight in some typical horrorcore imagery – hallucination, fear, dismemberment, execution, paranoia, etc – they keep it depressingly real and self-loathing, they anchor it firmly to the streets. The few flightier conceits they do attempt are ultimately subordinate to lumpen barbarisms like “Crazy’s what I be, remember that when I do’s ya” and “I close up my fist and make a nigga’s head spin / swell up his eyes and then break his fuckin’ chin…” Things get considerably ickier when they turn their attention to disease, threatening to inflict you or whoever else crosses them with mange, AIDS and, in what has to be one of the grimmest rhymes ever committed to tape, “an extra dose of gonorrhea that starts dripping from your rear”.


They delight in some typical horrorcore imagery – hallucination, fear, dismemberment, execution, paranoia, etc – but they keep it depressingly real.

The production elevates ‘Mad Fright Night’ yet higher above the transgressive rap norm. The dry-hit drums – delivered at precisely the tempo of baked-out city life – and one-note bassline conspire to generate that low-slung yet buzzing, propulsive quality that defines all the best New York hip-hop. RZA is clearly an influence on the moody sound design, all haunting, atonal keys, blood-curdling wails and a hint of nocturnal jazz, but there’s a subtlety and wealth of detail here that for me even Bobby Diggs in his prime barely matched.

‘Mad Fright Night’ isn’t a revolutionary track. But it is a peerless example of independent, underground East Coast rap at its most laconic, lethal and uncompromising, and in 15 long years I’ve not grown tired of it. The other tracks on those hard-to-find Grifter 12″s are of comparable, if not equal, brilliance, which makes one wonder what Lo-Down might’ve achieved had they not disappeared off the face of the earth almost as soon as they appeared on it. Chew and Rapture’s unerringly bleak lyrical preoccupations suggest they were headed rapidly either for the jailhouse or the cemetery, whichever opened its gates first; obscurity, by comparison, doesn’t seem like all that harsh a fate.