Oren Ambarchi: Audience of One 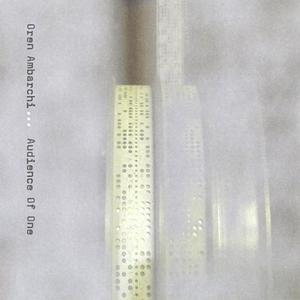 Were Oren Ambarchi to have a mantra, in this case highly conceivable, it would be something along the lines of, “Start simple then increase in complexity.” Although the improv. guitarist who is well recognised for supplying ‘Bass Bombs’ in SunnO))) and often associated with notions of Heavy, his solo work tends to be more delicate – with Audience Of One capturing him at his most porcelain.

Elements of soundtrack engulf much of the record. Not in the sense of all ambient music being soundtrack music, but rather that the record is littered with symbolism and structural revisionism. Textures reappear and notes return as the record shifts in and out of the foreground. Ambarchi, a master of sustained sound, allows every note to trail off, to be vapourous. This practice is merely a micro version of Oren’s episodic structures with notes and phrases entering, leaving, and returning to the record – creating a circular movement.

Such analytical structuring affects the record in contrasting ways. The notion of rebirth, which engulfs the LP can be readily associated with the spiritual, whereas ideas of higher order share kinship with the cosmic. Ambarchi has always engaged with the hallowed, citing tone and “music as time” as key factors. These elements plainly exist on Audience Of One, not least in opening track ‘Salt’ (the title recalling our mortality), where the stretched, slurred vocals, layered then repeated, contain elements of chant, ideas furthered by occasional chimes. With such pan-spiritual referencing the record extends well beyond, yet seldom overlooks, Ambarchi’s Jewish culture. To read that Ambarchi spent some time in the company of John Zorn doesn’t come as a surprise with Audience Of One featuring cultural fusion and tension, as well as dissonance.

Extended track ‘Knots’ is closest to SunnO))), and most quintessentially Ambarchi. With a slow-as-to-stop build the track finds momentum in a vast array of sounds, peaking with the fluttering drone of a generator that awkwardly occupyies a prominent position. ‘Cool’, meanwhile, features elements of jazz drumming, and in the track’s final stages Ambarchi introduces thick electronic pulses: paced, clearly defined, and rich. The care and balance into each of them suggests that they are coded, that they are designed to represent precise events. Even the high-tempo drumming that passes could be mistaken for a Library Recording, before the track retreats into cavernous industrialism then ends, à la Kreng; the corrupted soul of a virtual battlefield played at quarter-speed. The sound retiring to increasingly unexpected intervals – as unsettling as it is complex.

Although not the album’s zenith, it’s its final track ‘Fractured Mirror’ that throws up the most questions; a dutiful cover of former Kiss lead guitarist Ace Frehley. Those au fait with Frehley may be able to associate these artists more readily; however, from an Oren Ambarchi perspective, it is easy to draw parallels with his kinship to Phil Lynott. As such ‘Fractured Mirror’ brings about a lightheartedness that would otherwise be missing on the record, making for a beautiful and beguiling addition to what we already know of Oren Ambarchi.