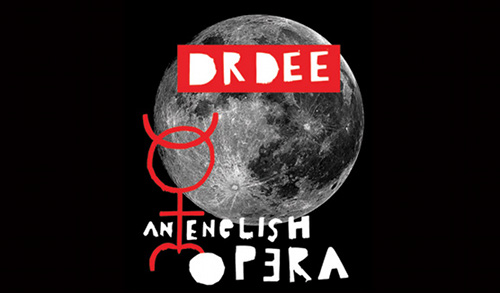 Damon Albarn, as we know, is no slugabed. Amidst his many fascinating extra-curricular activities, the Dr Dee ‘‘folk opera’ project stands out as particularly interesting.

Dr Dee, a collaboration between Albarn and esteemed director Rufus Norris, was first premiered in Manchester in 2011.  An adapted version of the production transfers to the ENO throughout June and July. Prior to that performance, however, comes the release of the Dr Dee studio album in May. Lead track ‘The Marvelous Dream’ [sic – we’re talking Elizabethan spelling here] is now available to stream online.

Doctor Dee‘s protagonist, legendary Renaissance polymath John Dee, was a chief advisor to Queen Elizabeth I, a field-leading astronomer and a high-profile occultist. Hubris, however, eventually came knocking: an ignominious scandal involving a medium eventually obliterated Dee’s public standing. Although the Manchester performances garnered pretty glowing reviews, the project hasn’t been without hitches: graphic novel legend Alan Moore left the process in a huff, and Albarn himself admits that the Manchester premiere was a fairly rough approximation of his intentions for the project.

‘The Marvelous Dream’ shows Albarn in The Good, The Band And The Queen mode, turning out lullabies for rainy mornings. It’s a delicate piece of folky pastoral: the lyrics paint a picture of smoke coiling over London and ponder over the moon. The album was recorded in Albarn’s West London studio, and also features recordings from the BBC Philharmonic Orchestra.