John Foxx & The Maths: The Shape Of Things 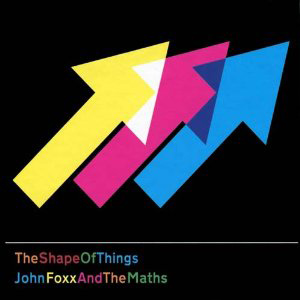 The Quiet Man, Dennis Leigh – aka John Foxx – returns with a new album, his second collaboration with synth collector and musician Ben ‘Benge’ Edwards and one of his finest albums to date, which considering the ungraspable influence that this most shadowy of artists has had on contemporary music, is quite a statement to make.

Foxx’s unmistakable and unshakably peculiar artistic vision has moved from a zone of futurism in the late ’70s early ’80s to a zone of Hauntology in 2012, without any kind of major stylistic or conceptual change. In fact, time has bizarrely warped around him rather than the other way round. The fusion of Ballardian concrete existentialism and surrealism and the rise of synthesiser music in at the dawn of the 1980s found its strongest and purest visionary in Foxx – the ‘Underpass’ single being a perfect condensation of these concerns in a matter of minutes. With the help of Benge, Foxx has created The Shape of Things using mostly analogue (and now practically antique) electronic equipment, so while the future-dreaming is still intact, the record feels curiously out of time. Foxx and Benge sound, nonetheless, impossibly futuristic – nobody in 2012 would (could?) make a record that sounds like this, and nobody in 1980 would have done either. There are barely any concessions to current electronic music, but The Shape Of Things doesn’t sound dated in any way whatsoever.

Foxx has pulled off the remarkable trick of making a pure synth-pop album that is decidedly abstract. There are melodies and beats and verses and choruses but the songs constantly upset themselves and the listener in sly and subtle ways. The melodies are rarely obvious, and even the few straight ones are scrambled by unlikely quirks and kinks. The album opens with ‘Spirus’, a short instrumental piece wrapping crunchy synth textures around a brittle, elegiac melody. ‘Rear-view Mirror’ is the first song, and drops the listener into a sad, ghostly – and perhaps familiar – world. An oddly multi-tracked Foxx still haunts, and is haunted, on the fly-overs and underpasses – “I saw you in- in my rear-view mirror/ It’s only a reflection/ It’s only a dream/ Something I’ve been keeping/ Too long to believe” he sings, before the track arrives at an almost dubby collapse. ‘September Song’ could almost be a revisioning of Kraftwerk’s ‘The Model’ with its playful melody and flattened clip-clop beat.  ‘Vapour Trails’ could be Depeche Mode if they been quite as brilliant as everyone says they were and is probably the most poppy song here, but is nonetheless tinted with a deep sense of loss – “Door’s open/ Cascading/ Sunrise aflame- You said you’d love to leave a vapour trail”. Mostly though, Foxx and Benge just sound like… well Foxx and Benge really. ‘Falling Away’ is monstrous with Foxx playing a guitar as savage as anything Andy Gill ever ripped out of the sky, over Benge’s phasing, hollow explosions. Vocally, Foxx sounds like Jhon Balance in Coil’s later years –  “All over London I can read between the lives / Watching the traces as they burn across the skies”

The singing is in fact masterful throughout – synth-pop has always attracted its fair share of dramatic frontmen delivering fraught or overwrought performances, but the production here re-routes the latent drama in other directions. The contrast between the lyrics as read and the songs as delivered is truly fascinating – on ‘Talk’, what reads as just outright heartbreaking on paper – ‘I talk… to you… in my sleep / And I know… you can hear me’ – becomes something altogether more sinister, Foxx’s heavily reverbed voice whispering almost malignantly over a creeping, nocturnal bassline.

The Shape of Things is populated by absent characters in empty spaces, lovers who have yet to and probably never will meet, non-existent reunions – the archetypal cityscape really – a sea of people that nobody knows. Everything is a memory or an internally projected image and there is absolutely no clarity to the reality of these dreams and the person or persons who are dreaming them. Foxx is the ultimate unreliable narrator. He once remarked that he spent five years living like a ghost in London, and this album more than any other in his oeuvre feels an evocation of that.  There are constant referrals to “you”: “I saw you – in my rear-view mirror” (‘Rear-view Mirror’); “I saw someone/ Who said you’re gone/ And you won’t be here again” (‘September Song’); “And here’s to you- When I walk this way/ I will see you change” (‘Tides’); “Inside some broken window frame, that world will always wait / But you will never get back if you ever hesitate” (‘Falling Away’).

It all becomes increasingly strange and a little disturbing – these reflections on others are mediated by glass surfaces or through an intermediary which leads to a complete disintegration of narrator and subject. In fact, The Shape of Things puts me in mind of that other master of melancholy sci-fi disorientation, Christopher Priest. There’s that same disturbing shock of having your world flashed back at you so that you don’t quite recognise it any more – reality slips in a moment, and with it your entire sense of your own self and history.

This dislocation of communication reaches its apotheosis in the concluding song, ‘The Shadow Of His Former Self’, wherein self-identity suffers a complete breakdown: “The Shadow of his former self/ Stepped into the room one day/ The traffic shimmered in the wind outside/ As the cloudlights moved away.” As its thin synth-lines, searching bass and stuttering, lost-in-the-background drum machine hits recede, we’re left to ruminate on the fate of our narrator as he too disappears: “So the shadow of his former self/ Switched on the radio/ As the traffic moved along outside/ He turned and closed the door”.

There is always something very strange about a John Foxx record. At his best, he demonstrates a huge empathy even in the most detached, distant of scenarios and I know of no other artist who is so brilliant at communicating the impossibility of communication and community in the post-industrial age. But there is also a sense of unobtainability: Foxx is the  ghost at the heart of his own work.  That ghost has just produced an album that says more about the downright fucking weirdness of city existence than any dancefloor, chillwave or hypnagogic artist you might care to name. The Shape of Things is an absolute triumph.