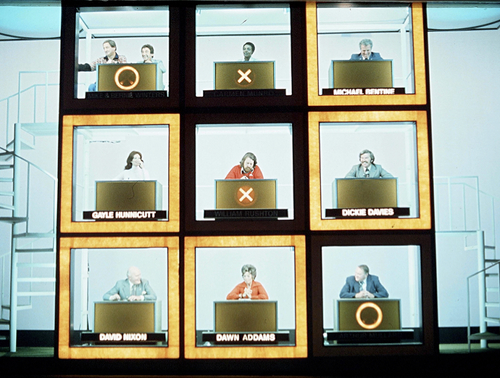 Hip-hop buff and a quiz show fan? Take note: this is the story for you.

The New York Times are reporting that American show Hollywood Squares – the Stateside quiz institution better known here as Celebrity Squares – is to get a hip-hop reboot. In May, MTV2 will launch ‘Hip-Hop Squares’, featuring a host of rap stars as resident celebrity guests.

Already confirmed to appear are Ghostface Killah, Fat Joe, Biz Markie, Mac Miller, and Machine Gun Kelly. Jackass gurner Bam Margera and comic Nick Cannon will also help fill out the 3×3 grid of stars, and New York DJ Peter Rosenberg will host. Rather wonderfully, MTV head of programming Paul Ricci promises a programme that’s “more party than game show”. Rather less wonderfully, the show is being aimed at “male Milennials – or ‘Malennials as we call them” – a bit of Birtspeak that doesn’t augur especially well.

The original show ran from 1965 through until the late 1980s, and was subsequently revived from 1998-2004. No news yet if the show will transfer to the UK, or inspire a similar programme: we’re holding out for ‘Pitbullseye’, ‘B.I.G Break’, and ‘The Cristal Maze’.