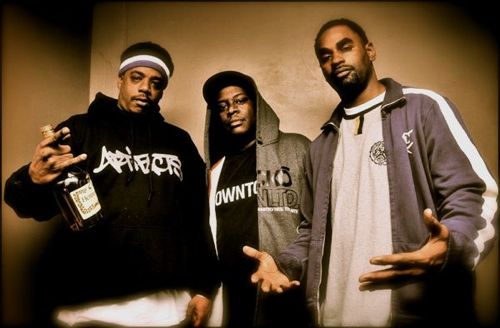 Cult hip-hop group Artifacts have returned with their first single together in over a decade.

A trio of El Da Sensei, Tame One and DJ Kaos, the New Jersey group released one of the all time great graffiti songs in 1994’s ‘Wrong Side of Da Tracks’, but split soon after the release of their second album That’s Them, in 1997.

Tame One went on to become a regular face in the hip-hop underground, joining Weathermen (a crew that was also home to Camu Tao, Cage, El-P, Cannibal Ox’s Vast Aire and more) and teaming up with Cage under the name Leak Bros for the PCP tribute album (yeah, really), Waterworld. El da Sensei, meanwhile, has continued to release solo albums on labels such as Fat Beats and Asfalt.

There’s been several minor reunions for Artifacts: in 2009, they performed ‘Wrong Side of Da Tracks’ together at New Jersey’s Rock Steady Crew Anniversary Weekend, and at the same festival the next year they officially performed with Kaos under the Artifacts banner. Then, earlier this year, the three joined forces on a remix of ‘Everyday in the Street’, from El Da Sensei’s Nu World Remix EP (though this wasn’t under the name Artifacts).

Now, it seems, it’s really on. ‘Easter’, produced by The Away Team’s Khrysis, is the first official Artifacts single in fifteen years. Released through Coalmine Records, it’s available now on iTunes and Amazon, and you can check how it sounds below.