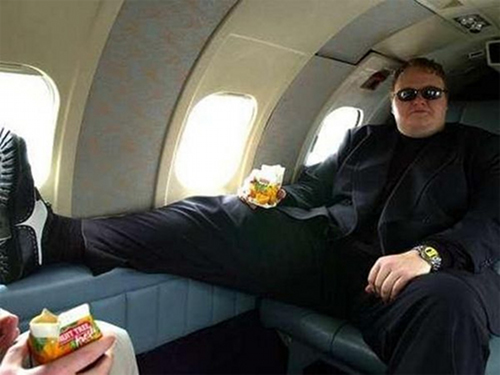 We already reported back in January that Megaupload loon Kim Dotcom allegedly had an album in the works. Despite Dotcom’s recent legal troubles, it appears that the project is well underway.

Mashable report that New Zealand judge David Harvey has relaxed Dotcom’s bail, meaning he is now allowed to access the internet and consort with his co-defendants. Most interesting of all – well, apart from Dotcom now being allowed to take a daily swim – is the news that Dotcom has also been granted permission to continue work on an upcoming album. Dotcom can now travel to an Auckland studio twice a week in order to finish the project.

Dotcom, head of verboten file-sharer Megaupload, was arrested in January; officers found him holed up in a safe room in his New Zealand mansion, shotgun in hand. The man The Daily Mail called ‘Internet’s Dr. Evil’ is a veritable treasure trove of interesting stories: he once put up a $10m bounty to find Bin Laden, and is allegedly the world’s top Modern Warfare 3 player.