Torche guitarist needs vaccination after a bat pisses in his eye. No, really. 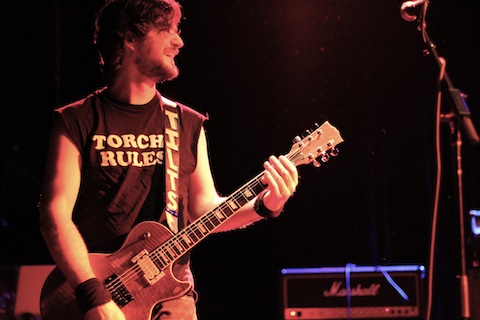 Remember the pigeon shitting in the Kings of Leon bassist’s mouth? This is arguably worse.

Andrew Elstner, guitarist in Hydra Head band Torche, has had to be vaccinated after a bat pissed into his eyeball.

No, seriously. Elstner posted on Facebook that the incident occurred in an “old house where I used to live in Wildwood … For those unaware, this house was built in 1824 and rests on 70+ acres, and my old roomie who still lives here leaves the back door open so his dogs came roam at will. The dogs are awesome, btw. When we first arrive, it’s almost 4am and I’m showing Mat Gaz the house, “Ok, check it out… Here’s the kitchen. And here’s like a family room type deal…” I switch on the overhead light/ceiling fan combo and what I think at first is a shadow being cast from the spinning fan blades turns out to be a freaking bat.

“It circles the room a few times at light speed, and on one of the turns, dive bombs my head and squirts a little nervous pee into my eye. Holy shit. I’m laughing but run to the sink and attempt to flush my eye out. I’m pretty sure I’m fine but… Not the most common of occurrences.”

Not the most common of occurrences, but one that could be worth serious kvlt points, especially if Elstner had bitten the bat’s head off. What’s not so metal, however (though it is sensible), is the fact that Elstner told his parents about the attack, who “proceeded to have a meltdown” over the fact that he might have rabies. Now, you can’t get rabies from a bat’s feces or urine, but later in the Facebook thread Elstner makes the valid point that it could’ve been saliva.

“Now I’m imagining a crazed, salivating bat and further, imagining that it angrily spat into my eye. Extremely unlikely, and the percentage of rabies infected bats in the US is around 1% of the total population. Still, just being safe. Weirdest shit ever.”

And then: “Rabies Control and CDC people are telling me I need shots, specifically for the reason I imagined: it could’ve been saliva AND I slept in the same house with it, could’ve bitten me in my sleep! What?! I wish I was making this shit up. My info and story were just now faxed to the CDC in Atlanta. Whaaaat!?!?”

Whaaaat!?!?, indeed. It should be pointed out at this point that Torche are a pretty good band, unlike the Kings of Leon, so this could be all the proof you’ll ever need that pigeons have better taste than bats.