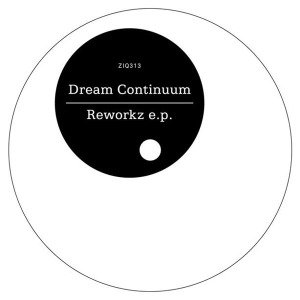 Blending two or more genres is fairly common practice in the 21st century, particularly in the increasingly complicated Venn diagram that makes up electronic dance music. The reasons behind that are pretty obvious: most self-respecting DJs try to mix up genres in their sets, and producers re-create and re-interpret those fusions into their own productions. Dream Continuum, a collaborative project between Machinedrum (Travis Stewart) and Om Unit (Jim Coles), started in a similarly simple, explorative fashion.

Om Unit spent a lot of last year undertaking the Phillip D Kick “Footwork Jungle” experiment, an idea he had following a discussion on how fun it was to mix the two dance music staples together when DJing. It turned out Stewart was up to exactly the same thing (see his Ecstasy Boom EP, a companion piece to his quietly phenomenal Room(s) LP), so working together seemed a natural idea to further explore that “sweet spot” where the hectic syncopation of US footwork and loose UK jungle breaks meet. Despite its humble inception, the result is three essential slices of frantic, tightly weaved euphoria.

‘B Free’ is packed with the sirens of jungle’s own unique mythology: high-pitched diva vocals calling for ecstatic freedom while the almighty rulers of 160bpm drum patterns compete for presence in the mix. If you think that would sound like a cacophonous mess of rim shots, snares, kick drums and sped-up breaks then you’d almost be right, but it’s a marvelous mess to be caught up in. While juke is driven by its itchiness, the jungle infusion creates a somewhat unexpected flow, enhanced all the more by ‘B Free’’s jittering low-end and the rapturous chords that glide over the latter portion of the tune.

‘Giv A Lil Luv’, the EPs finest moment, barely lets the afterglow left by the end of the lead track fade before drawing for the rave pianos and more vocal sample highs. When the track drops it becomes almost like a Necker Cube optical illusion: focus your attention on the breaks and you almost forget about the head-jerking snare. Meanwhile, the bass is complimenting both styles with ease; a consistent motif that continues on the flip.

If there is a bona fide “sweet spot” between jungle and footwork then Stewart and Coles have found it. You could argue that someone was bound to eventually; Coles himself has compared the organic process of genre exploration with the principle of Shared Social Consciousness: the idea that no idea is original. But ultimately it’s not the idea, but the execution that matters most. And with these two, the execution is always precisely on point.