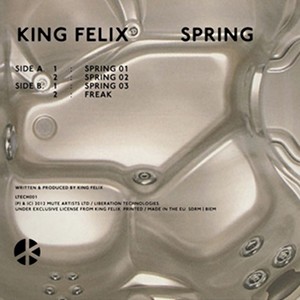 A (probably over-) simplistic view of Laurel Halo’s recent output would see her music – which has in the past been dependably amorphous – crystallising into two distinct strands. Quarantine, her forthcoming album on Hyperdub, is fluid, beatless, often song-based – taking the pop sensibility of 2010’s King Felix EP and marrying it to the masterfully sensuous synthetic textures of last year’s brilliant Hour Logic.

This EP, the inaugural release on Mute’s new Liberation Technologies imprint (somewhat confusingly under the alias King Felix), pushes in the other direction: the bold percussion that recurs throughout her music, though generally in a supporting role, is now thrust into the limelight. Halo has paid homage to Detroit techno in the past – she grew up within spitting distance of the motor city – and here that indebtedness is worn proudly on-sleeve. You could almost call it dance music, were it not for the fact that Halo’s balance of frequencies has always implied a different set of priorities. In a sense, these tracks occupy the same slightly paradoxical space as much of the discography of 100% Silk – bedroom jams that draw their energy from dancefloor functionality – except Halo, to her credit, isn’t remotely engaged in the same play of familiar signifiers, the fancy-dress-box approach to genre that leaves so much “hipster house” open for criticism.

‘Spring 01’ and ’Spring 03’ feel like two realisations of the same initial idea, as if the universe split into two halfway through a production session – many worlds on one twelve-inch. Both open with the scintillating, sampled orchestral chords that seem to bind together all three ‘Spring’ tracks, trotting along at a brisk pace while ratcheting up the tension through painstakingly detailed layering and edits. The latter is the more evocative, as muted snatches of vocal drift past in the middle distance, smudged into an indistinct fug. Ultimately, there’s nothing resembling a pay-off in the dancefloor sense – both tracks open out onto an uncertain plateau around the halfway mark, not quite propulsive but far from static, before petering out in unexpected ways.

That’s a defining characteristic of this EP – the measured ascent, not to resolution but to further ambiguity. ’Spring 02’ is the most conventionally danceable track here, opening with a techno-ish, if slightly pedestrian, four-to-the-floor loop. After a while the kickdrum drops out and those now-familiar sampled chords hover just on the edge of hearing, before bursting gratifyingly into full view. The whole thing has a cruising, sunkissed feel (Halo has in the past said her music is optimised for the daily commute), but it’s still held just fractionally back from coalescing into something with self-evident purpose – motifs are always slightly clouded, unclear, unstable.

That’s a compliment by the way – though it could also be this record’s achilles heel. Laurel Halo’s music is always controlled to a fault, but the Spring EP is controlled in a different way: those atmospherics are reigned in by the drums, their strangeness tightly contained, though thankfully not stifled completely.

Closer ‘Freak’ feels like a bit of an afterthought, being the only beatless track of the four and seemingly not built around that same orchestral sample (although its muted harmonies sound as if cut from the same cloth). It centres around the undulating contour of its bassline, over which dreamy, slightly gothic chords are laid out in sequence. The result is seductively unsettled, artfully smeared together – but always with that bassline marking time underneath. And while this EP is undoubtedly the work of a brilliant producer in the ascendant, that’s the sense it gives off – that of marking time. Onwards to bigger and better things.