In the wake of ‘cloud-rap’, ‘trillwave’ and the rest, this ’97 hip-hop oddity sounds more prescient than ever. 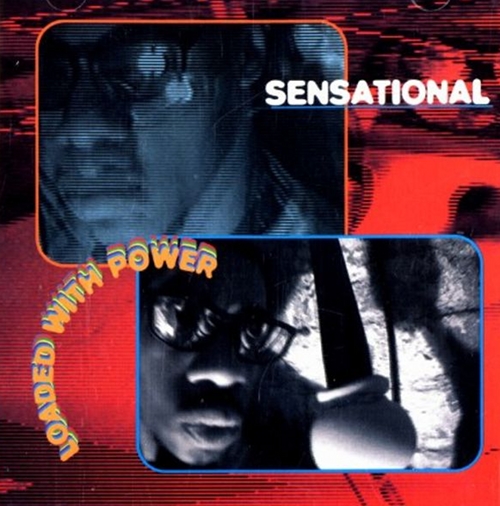 Right at the heart of things is The Notorious B.I.G, the wunderkind who lost his life and topped the charts. The Wu-Tang Clan have hustled back into view with Wu-Tang Forever; Wyclef Jean – and this actually mattered back then – is hawking a solo record. Crane a little, and you’ll see that there’s plenty happening on the fringes too: Company Flow have released alt.rap touchstone Funcrusher Plus, and seven L.A. based misfits have just launched a promising little label called Anticon.

Deep in the hip-hop hinterlands – way past squinting distance – something fascinating is going on largely unnoticed. Without fuss and without funds, Colin Julius Bobb (aka Torture, aka Perfection, aka Sensational) is quietly assembling his debut LP. He’s probably too blunted to notice, but he’s about to produce one of the most idiosyncratic debuts of the decade. Loaded With Power is a lo-fi wonder – introverted, disorientating, and, in its own way, hugely prescient.


He’s probably too blunted to notice, but Sensational is about to produce one of the most idiosyncratic debuts of the decade.

Sensational first rose to (sort of) attention as a teenage dancer for The Jungle Brothers; legend suggests that a young Bobb could be caught spitting over Stockhausen records in the studio. Initially trading as Torture, he rapped with the group on their famously outré Crazy Wisdom Masters LP, released in eviscerated form as J Beez Wit The Remedy in 1993.

Three years later, a listless Sensational began recording Loaded With Power on a four-track in his bedroom, ceremonially rechristened ‘The Bomb Shelter’ for the occasion. His set-up was punishingly lo-fi: in the absence of any real equipment, he was forced to use his headphone cans as a makeshift microphone. In a world before Freesound and Bittorrent, Sensational had to snaffle out his own sonic materials; stalking trains and streets with a Dictaphone, he carefully accumulated fragments of ambient noise. Cobbled together with the rudest of materials, Loaded With Power gradually took shape.

The resulting LP is as deep-fried as you might expect, a gloomy odyssey into a befuddled mind. Each of the eighteen instrumentals sound like they’ve just been excavated from some moss-clad oubliette. Muffled drums thud and tap; caliginous bass tones swell uneasily; indistinct elements rumble and groan at the periphery of the mix. There are some affinities to the contemporary ‘Illbient’ movement, but Sensational’s atmospherics vastly outspook DJ Olive et al. ‘Sensational’, like his old ‘Torture’ moniker, is an unlikely nom de boom in this context – the overall mood is woozy, quarantined, numb. 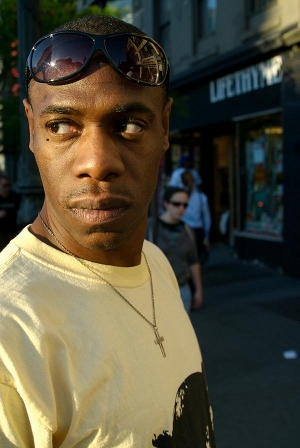 Sensational’s voice, bitcrushed and weather-beaten, is only ever a rasp away from unraveling completely. Much of this is due to the pitiable recording quality, but there’s also a natural frailty to his tone. On ‘After Hours’, his words are phased and filtered beyond recognition. ‘Served Proper’, meanwhile, shows his voice gradually disintegrating, the occasional phrase (“eloquent speech”/”I don’t need no hooks”) just about drifting into earshot. Sensational habitually describes his sound as space-age, but the effect is more like listening to a phonautograph – a reedy bleat, recorded on smoke-stained vellum.

Sensational’s flow is certainly distinctive. His rhymes trip from association to association, striking upon inspired non-sequiturs as if by chance. He goes in for assonance in a big way. On ‘Vibration’, he brags about “piles of style”; elsewhere, his “memory banks give thanks to the tanks”. Sometimes his metaphors are oddly skewed, as on the cold-turkey clunk of ‘Craving Satisfaction’ (“I hit you in the head with drama”). More often than not, though, things deliquesce into joyful mumbo-jumbo. A good 50% of ‘Ways To Swing’ consists of the words “wiggle wiggle, jiggle jiggle”. There’s something highly compelling about Sensational’s tentative wielding of language. It’s as if he’s discovering these words for the first time.

One of Loaded With Power’s more subtle charms is its warped underdog quality. Like Daniel Johnston desperately attempting to be The Beatles, Sensational constantly flaunts his non-existent swagger. Through his makeshift non-microphone, Sensational brags about his bling (“I’m sexy dressed up in expensive gear”), his machismo (“You ever got robbed before?”) and his sex appeal (“Naturally the ladies love me”). There’s something sweetly vulnerable about hearing a voice this impoverished flashing non-existent riches. Trash-talk, with the emphasis on the trash.


One of Loaded With Power’s more subtle charms is its warped underdog quality.

Elsewhere, he simply sounds confused. A track called ‘Hardcore’ might promise back-to-basics lyricism, but the rapping never comes. Instead, Sensational quietly mumbles the words “no, no, no, no” over and over again. His delusions of grandeur are accompanied by a heavy dose of paranoia. On ‘Thick Marker’, his voice quavers as he threatens to “slip a pill in your drink/Make you chill”. Listen hard, and you can just about hear the rustle of his tin-foil hat. Many 90s rappers make a virtue of knowing ‘where you’re at’; Sensational, it appears, doesn’t have a bloody clue.

This dodderiness is important. Paid-up fans often paint Sensational as a Blakean visionary, operating under the terms of a cosmology of his own making. It’s a beguiling argument: some of his favourite tics – “always hit the aim”, “freakstyler” – repeatedly crop up not just across the record, but over his entire career. Ultimately, however, very little in Loaded With Power points towards a coherent game-plan. Rather than a seer, then, it might be better to think of Sensational as a hermit, a weed-wreathed cenobite. He’s a folk artist, obsessively cobbling together what he can with minimal resources and zero company.

Loaded With Power bears this reading out. The songs are presented as miniature hermitudes; as he whispers on ‘When I Deal Minze’, “This track is like a doormat/This is my house”. With the assiduousness of a coupon queen, Sensational improvises his own ramshackle alternatives to mainstream bombast. ‘Where It Started At’ sees Sensational multi-tracking his voice in a vain attempt to simulate his non-existent crew. On ‘Freaky Alert’, Sensational’s imitation of a rave siren inadvertently sounds like the wail of a ghost, the beat like the clanking of chains. Many of his subsequent projects have this crappy Xeroxed quality: take ropey film vehicle Crooked, Sensational’s no-budget answer to 8 Mile. A line from ‘How I Deal Minze’ sums up Sensational’s homespun charms: “Do a show with no rehearsal/ I’m professional/ My production is musical sounds erupting”. That heady mix of delusion, self-promotion and nonsense, delivered in stumbling scansion, captures Loaded With Power ‘s outsider mentality in a cobwebbed nutshell.


Many 90s rappers make a virtue of knowing ‘where you’re at’; Sensational, it appears, doesn’t have a bloody clue.

Although it was widely ignored on release, Loaded With Power hasn’t entirely been left to flounder in the wilderness. The record has become something of a canonical text for adventurous hip-hop fans; Actress and Anti-Pop Consortium are among its more visible supporters. For better or for worse, Sensational would never sound quite this weird again. Follow-up Corner The Market was marginally brighter; by 2000’s Heavyweighter, the fog had lifted substantially. After a decade of addiction problems and spates of homelessness, Sensational is still haphazardly stumbling from project to project. 2009’s Anarchist Republic of Bzzz saw him teaming up with experimental guitarists Arto Lindsay and Marc Ribot. His 2010 12” with techno oddball Nochexxx is similarly off-the-wall, as is this year’s collaboration with reclusive producer Randfunk.

In the wake of ‘cloud-rap’, ‘trillwave’ and the rest of it, Loaded With Power sounds more prescient than ever. Lest we forget, Sensational was pottering around in the leftfield long before Lil B picked up his first mime spatula. Sensational’s blunted reinterpretation of Golden Era boom-bap anticipates Spaceghostpurrp’s smoggy rap revivalism. Equally, his gnomic flow sets a precedent for Soulja Boy’s off-kilter sloganeering. ‘Godfather’ might be too strong a word, but it’s tempting to paint Sensational as a sort of daffy uncle to the current wave of bedroom auteurs. To really understand Sensational’s curious enterprise, however, it’s probably best to return to Loaded With Power’s lyric sheet: “This is how I like to do things/All original/I ain’t trying to sound like nobody but me”.