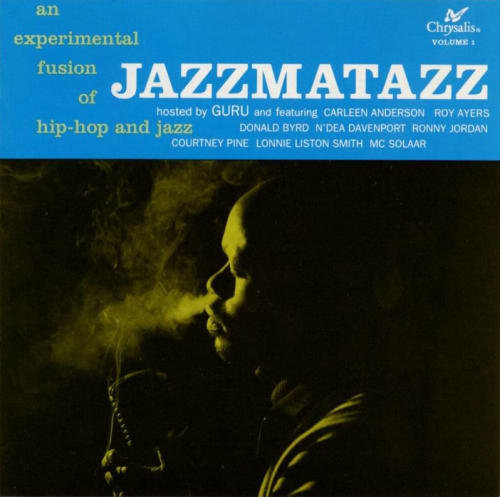 Much-missed MC Guru remains best known as 50% of Gang Starr. It’s his work under the Jazzmatazz moniker, however, that’s now the subject of mild controversy.

The Jazzmatazz series endeavoured to fuse the worlds of jazz and hip-hop in an innovative, non-gimmicky way. Jazzmatazz Vol. 1 saw the light of day in 1993, and featured Guru rapping over instrumental contributions from the likes of Branford Marsalis and Roy Ayers. Subsequent volumes followed in 1995, 2000 and 2007. Guru passed away after a battle with cancer in 2010.

With the first Jazzmatazz album approaching its twentieth birthday, former contributor Solar is planning to resuscitate the series. All Hip-Hop report that the rapper is drawing together a new touring band in honour of the project. Solar will front the combo, with Living Colour members Will Calhoun and Doug Wimbush also on board.

According to Solar: “It took me a long time to pick up the pieces – make decisions. Losing Guru was a lot to deal with but now I know I can move on. With Jazzmatazz’s 20th anniversary next year, Guru just might be smiling over the fact we will be playing out live again…Jazzmatazz was Guru’s at first but when I joined, Jazzmatazz became our pride and joy. I hope to rekindle that pride – that joy – and by doing touring, I’m carrying on Guru’s legacy”

Many fans will raise an eyebrow at the news. Much of the hip-hop community rounded on Solar after Guru fell seriously ill, claiming that he was manipulating the ailing rapper. Solar was accused of issuing fallacious press statements on Guru’s behalf, and subsequently of denying Guru’s family access to the fading rapper. Allegations have also emerged that Solar had been physically abusive towards Guru. Solar’s motives may be entirely sincere, but it’s difficult to imagine Jazzmatazz 2012 will be viewed without suspicion from certain quarters.