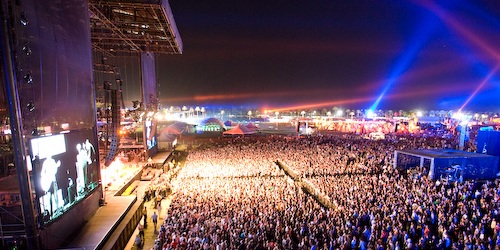 Coachella has put up a schedule of performers they will livestream this weekend, the first of two during which the California festival occurs. Starting today at 3:55 PM Pacific time, there will be three channels dedicated to covering Coachella’s musicians as they perform.

M83, Amon Tobin, Frank Ocean, and others will be included in today’s coverage, while Saturday’s broadcast includes Bon Iver, A$AP Rocky, and Destroyer, and Sunday’s offerings count Florence + The Machine, Modeselektor, and Gotye.

Many will be disappointed to find that many major acts are, at least at this point, excluded from the livestream schedule. In addition to headliners Radiohead and Dr. Dre & Snoop Dogg, other popular acts such as Feist, The Weeknd, Jeff Mangum, Godspeed You! Black Emperor, Kendrick Lamar, DJ Shadow, Araabmuzik, Flying Lotus, Girl Talk, At The Drive-In, EMA, SBTRKT, and the Horrors will not be covered. One can only hope these performers will be featured in next weekend’s livestream.

You can watch the coverage and find a schedule of performances here. A trailer for the livestream is below.