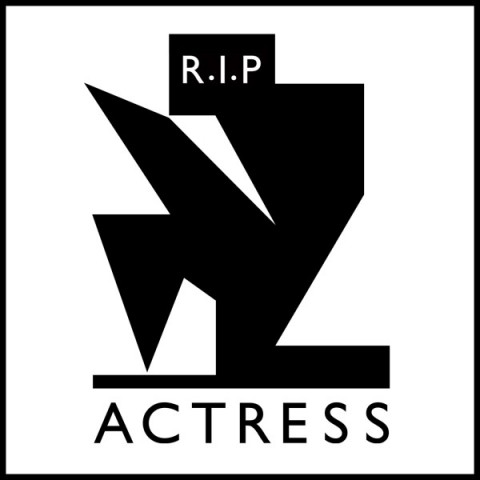 Where Hazyville and Splazsh easily submitted to distraction or long passages of singular occupation, R.I.P shows Actress now fully in control and directing with ease ideas that have previously come together as instances within a much vaguer whole. In this, his third album, his music has significantly improved in its definition: while much of what drew people to his previous work was a willingness to be goaded and surprised by its unpredictability, there’s a relative lack of awkwardness in R.I.P’s progression, both among the tracks and in the balance of sounds found within each of them.

Opener ‘RIP’ sets the tone, its square wave flutes muddled with rough surface texture processing, a descending melody reminiscent (aptly) of D.I.E.’s ‘R U Married?’ cutting through periodically. It’s ghostly, bleached, floating in an endless monochrome space, and this aesthetic persists throughout the album, the sound washed into black, white and bone.

However, while saturation is still key to Darren Cunningham’s sound, the layers of instrumentation used are more distinct than ever here; the constituent parts are balanced extremely carefully. The Detroit allusions don’t stop with ‘RIP’; rather they accumulate, despite being delivered in unexpected keyboard voicings – strings, harps, guitar, warped bell tones, folk flutes, vox. Fundamentally timeless as such instruments are in so many cultures, it is hard to imagine their textures tonalities aging; subordinating them to the structures and aesthetics of the Detroit techno has inspired him has a sublime and disorienting effect.

While all pulse with varying degrees of intensity, of R.I.P’s fifteen tracks, eleven have little to no percussion at all, the focus often solely on a kick and a heavy side-chaining of textures. On ‘Ascension’ the kick is muted entirely, the sparkling keys hazily scrubbed and blinked out like a slow-motion strobe. Where percussion is present it’s usually as part of tightly layered collages scattered among parts – the metallic splashes of ‘Holy Water’, for instance, or the time-stretched buzzes and chattering maracas of ‘Tree Of Knowledge’.

‘Jardin’ is a useful example of another engaging aspect of R.I.P, Actress blending programmed and what appears to be free-played material. As its winding, cascading melody unfolds, a rigorous strummed harmony structure takes shape around it. ‘Serpent’ follows using a similar technique, dramatic bouncing pizzicato string punches aligning themselves into an angular bassline around the woody kick that appears. The revolving calliope-like synth of ‘N E W’ shares a similarly hypnotic clumsiness.

Even in moments where the played instrumentation could be critiqued for being less than graceful – the simple, unsteady arpeggio of ‘Glint’ and the muffled, nervous synth ice choir wailings buffeting around ‘Marble Plexus’ – they’re actually all the more complimentary for being noticeably imperfect, loose, even amateurish. It is not difficult to relish these. Within both the pointedly brilliant sound design, solidity of the surrounding programmed parts and the larger context and concept of the record, the presence of these overtly human touches affirm the sense of possibility, and the individuality, at the heart of the record.

R.I.P is a fantastical, fascinating album: as Actress intended, it feels not really of this world. That it is more focused and ultimately successful than its predecessors is symptomatic of what is obviously a very human, personal journey for its maker.