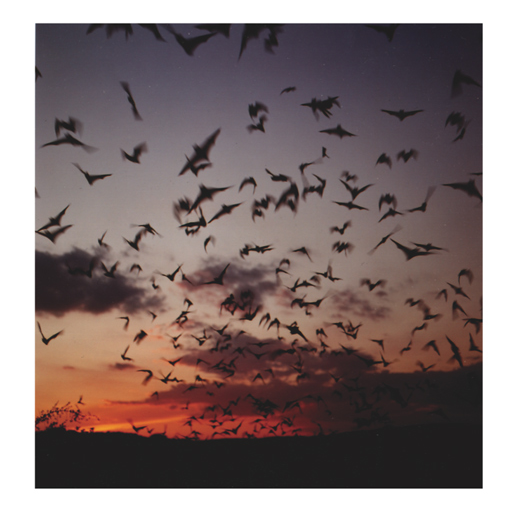 The Vinyl Factory has collaborated with Jeremy Deller on an intriguing new edition.

It’s the second Deller release created by VF to coincide with the Turner Prize-winning artist’s major solo retrospective at the Hayward Gallery in London. And what is it? Wait for it… it’s a frequency recording of Brazilian and Mexican free-tail bats leaving Frio Caves in Texas!

This fascinating, six-minute field recording was made by Deller himself and captures what is, to all intents and purposes, an entirely natural electronic music (rumours that the bats were leaving the caves to go and sign a three-album deal with Raster-Noton are unconfirmed). Check out this short excerpt:

The audio is pressed on 180g one-sided vinyl and the sleeve features exclusive cover photography, shot by Deller on location in West Texas and printed on Perfect Image pristine white board. Signed and hand-numbered by the artist, this edition, limited to 50 copies is available to pre-order now for £100, exclusively from The Vinyl Factory, with an estimated shipping date of April 25.

An unsigned edition will be available will be at The Hayward and at the galleries in Europe and the States that the exhibition, Joy In People, is touring to.

The Vinyl Factory recently collaborated with Deller on another release, featuring two cover versions by Chuck, a singer/musician who often plays along the South Bank (site of the Hayward Gallery), cut direct to disc at a West London studio. More information here.

Jeremy Deller stayed in A Room for London, Artangel’s one-bedroom installation above the River Thames, on 23 March 2012. During his time there, Deller invited Chuck to play a set on board the boat-shaped hotel, and to talk about his life performing at different spots in London and Paris. This is what happened: