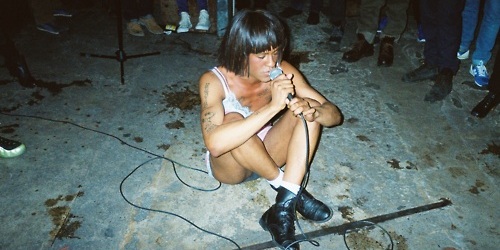 Mykki Blanco, the fierce-rhyming, feminine alter ego of Michael D. Quattlebaum, has brought a lot of ruckus with only a few songs to her name. This is perhaps inevitable due to the unique figure she cuts within hiphop, but her music has often fallen by the wayside as people focus on her image and what she represents.

That is also understandable. Her small output has, until now, not been the most accessible. Where her previous tracks featured her voice immersed deep within murky layers of noise, ‘Wavvy’ presents her spitting and warbling high in the mix over Chicagoan Brenmar’s brightly-hued, yet menacing, synths. It’s no accident that she appropriates the favored superlative of modern rap thugs in her adopted town of NYC; as many worlds apart as Mykki Blanco and French Montana may seem, they walk the same streets and Blanco can be just as wavy as any hard-nosed goon.

Mykki will be releasing the EP Mykki Blanco & the Mutant Angels on May 15th through UNO, which promises to be a more punk-oriented affair than the music she’s released this far.

Check out the new track below.