Watch President Obama kick a slow jam with The Roots 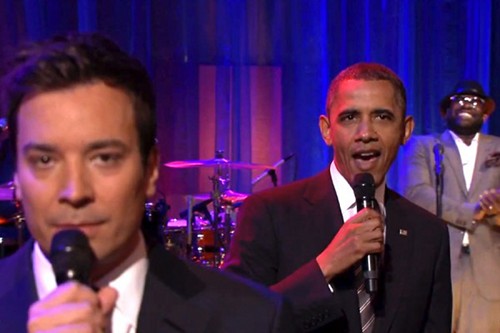 Plenty of folks went gooey at the knees when President Barack Obama gave us a snatch of Al Green’s ‘Let’s Stay Together’ at an event in January.

As Pitchfork jubilantly report, Obama’s now outdone himself in the loverman stakes. On last night’s edition of Late Night With Jimmy Fallon, the President Of The United States slow-jammed a policy announcement with live backing from The Roots.

Obama’s plans to freeze the costs of federal student loans were interspersed with breathy interjections from Fallon (sample: ‘The Preezy Of The United Steezy”) and Roots leader Black Thought (“He’s the POTUS with the mostest”).

One thing’s for sure: it’s a damn sight more palatable than Mark E. Smith reading the football results.