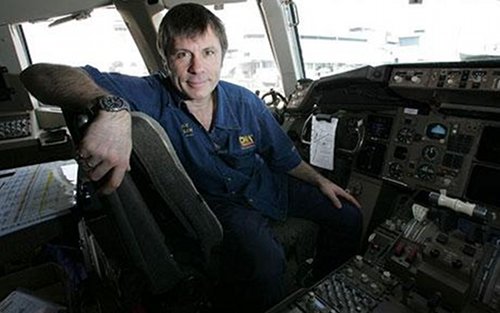 According to BBC News, Dickinson is using his aviation expertise to help kickstart the economy. The Iron Maiden frontman has unveiled plans to open a new aircraft business in Wales, potentially creating hundreds of jobs in the process.

Cardiff Aviation Ltd will keep airliners and large aircraft maintained, as well as offering on-site training. The company will be based at the wonderfully named Twin Peaks Hangar at St. Athan in the Vale Of Glamorgan.

Dickinson claimed the project had enjoyed “a level of enthusiasm and drive that has been a delight to behold. We’re coming into this enterprise with the knowledge that we’ll also be bringing business to south Wales. South Wales has long had an association with the aircraft industry and I am delighted that I am able to have a small part in the continuation of that tradition”.

It’s not Dickinson’s first aeronautic intervention in the last twelve months. In November, he rallied interest to help save failing airline Astraeus Airlines, albeit to little success. No news on whether ‘747th Son Of A 747th Son’ will be the Cardiff Aviation Ltd slogan.