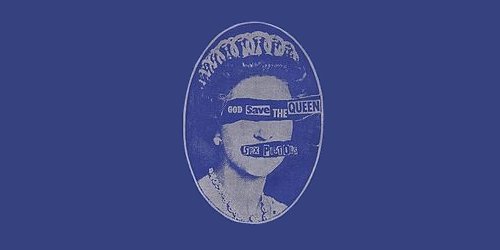 The Vinyl Factory have joined forces with The Mott Collection for a new exhibition.

Titled Jubilee, 2012: Sixty Punk Singles, it aims to celebrate the Queen’s Diamond Jubilee in a different way to most – with an exploration of punk singles.

As the press release for the exhibition emphasises, “In 1977, The Queen – the actual representation of the British state – and The Sex Pistols – the raw voice of youthful rebellion – were engaged with each other in some tortured parasitical dance of opposites, the young versus the old: the nation fractured. Now we view Punk as much a part of Britishness as chicken tikka masala. Its underlying rage is still vocal, its target not so much The Queen as social injustice.

“The Sex Pistols’ 1977 Silver Jubilee tribute ‘God Save The Queen’ politicised punk by targeting the emblem of the establishment. Banned by the BBC and fired by two record companies, The Pistols controversially reached the top of the pop charts. The single’s sleeve, designed by Jaime Reid, defaced Cecil Beaton’s official jubilee portrait of The Queen by sticking a safety pin through her nose.

“A flood of Punk 45’s released on newly emerging independent labels covered the walls of record shops. The immediate, stark, black and white artwork grabbed music fans’ attention. Surrounded by images of defiance, kids listened intently through headphones to the new singles – only after much deliberation would one would be selected. They cost 65 pence.

“Now, 35 years later, we celebrate this symbiotic relationship: The Queen representing quintessential British values and Punk exemplifying Britain’s inventive spirit. We’ve come a long way, but Punk is as relevant today as it was back then.

As well as the exhibition, which takes place from May 30 to June 24 at the Vinyl Factory Gallery on Walton St, Chelsea, there will be a limited edition book made to celebrate the occasion. Limited to 100 copies worldwide, the 132-page catalogue will document the sixty punk singles that the exhibition showcases, and includes an essay by Toby Mott and exclusive 7″ single.

Each copy is hand signed and numbered by the artist, and will be available to pre-order from The Vinyl Factory in the near future.