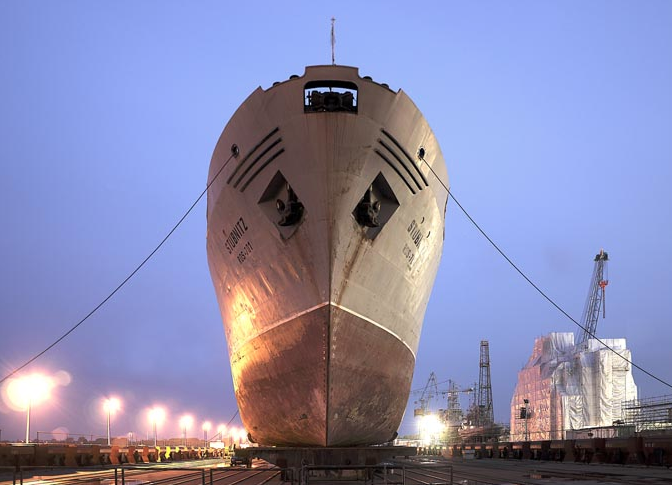 Much as we liked the, er, homespun charm of the Butlins Holiday Centre in Minehead, we were delighted to hear that the Bloc festival would be moving its operations to London for 2012.

It’s been known for some time that the festival will this year take place on in and around the London Pleasure Gardens, on July 6-7, but specific details of some entirely unexpected venues have just been revealed. Chief among these is M.S. Stubnitz – in the words of Bloc, “2,541 tonnes of ex-Communist nautical mayhem”.

The Stubnitz is a deep-sea fishing vessel that belonged to the German Democratic Republic prior to the collapse of communism, but has since been converted into “moving platform for the sonic and visual arts”. Swiss-born Sonic artist Urs ‘Blo’ Blaser took possession of the ship – the largest in the DDR’s fleet – in 1992, taking advantage of an ownership vacuum that had opened up in the wake of the Berlin Wall’s fall. He had the hull modified to his specifications, with an atrium gallery looking down over a main dancefloor space, and a second club space positioned in the ship’s stern. This is the ship’s first visit to London, where it’ll be used exclusively for Bloc – find out more in this short documentary.

The London Pleasure Gardens is a site of no less than 60,000 square metres, with two large, permanently installed, covered and soundproofed club/auditorium spaces – The Hub and The Dome – that Bloc will supplement with some temporary structures, including the huge main stage. The Dome is an “acoustically treated, 30m geodesic dome presented in the round, with DJs appearing in the middle of the crowd underneath an immense battery of lights and lasers”, while The Hub is the second largest stage after the main stage.

As if that weren’t enough rave architecture for you, the former Charing Cross floating pier has been converted into a cocktail bar, and a fairground waltzer is being installed as a “literal representation” of Ceephax Acid Crew’s Waltzer label, accompanied by DJ sets and live performances from Ray Keith, Nathan Fake, DMX Krew and Ceephax himself.