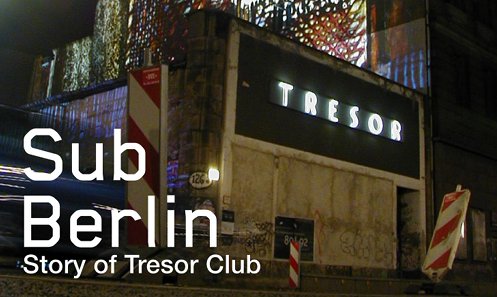 Berlin beat bunker Tresor is to be commemorated in a new documentary film.

The legendary club/label have just released an 89 minute DVD retrospective, titled SubBerlin: Story Of Tresor Club. The film celebrates the initial 1991-2005 lifespan of the club, which became one of the most influential nightspots in techno. Juan Atkins, Jeff Mills, Josh Wink and Sven Vath are among the bigwigs to play talking head for the flick.

The film comes packaged with a soundtrack CD (the tracklisting of which is included below), plus a booklet, a ticket to the relocated Tresor club and a host of other goodies. Following on from his ‘back to school’ FACT mix, FACT now have an exclusive download of Juan Atkins’ classic ‘Game One’, originally released in 1994 under his Infiniti guise.

Even if you haven’t encountered a Model 500 or Metroplex record, you’ll definitely be familiar with Atkins’ sound. No techno producer’s work is quite so chromosomal: his influence is discernible in techno from the early 1990s through to the present day. ‘Game One’ is a case in point – a pulsing, twinkling morass of analogue sounds.

Atkins also has a fresh release due through Tresor. Infiniti The Remixes: Part 1 will be the 250th release on the indefatigable label. The set will include original mixes of ‘Walking On Water’ and ‘Thought Process’, plus remixes from Thomas Fehlmann and TV Victor. Parts 2 and 3 will include remixes from Redshape, Function and Sleeparchive. More information on the film and the record are available from the Tresor site.