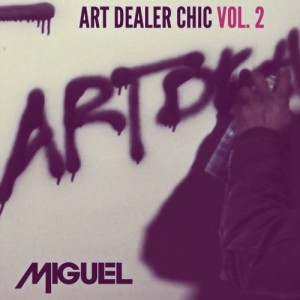 Last year, Californian singer Miguel Pimentel came up with the slow-burn R&B hit of the summer, ‘Sure Thing’: a wonderfully understated song that didn’t so much blow you away on first listen with hooks or beats as gently, gradually sneak under your skin with its unpretentious sincerity. The charms of its parent album, All I Want Is You, were similarly low-key: mostly overlooked at the time due to its lack of obvious novelty or innovation, it demonstrated the superiority of Miguel’s knack for capturing mood and crystallising it in melody.

This year, Miguel has turned this approach on its head: rather than heading into another major label album cycle, the past three months have seen him release a trilogy of EPs for free download. But far from throwaway freebies, the three Art Dealer Chic volumes find Miguel consciously – at times perhaps too self-consciously – seeking to position himself as an auteur whose boundary-pushing is his selling point. Inevitably, the plaudits have rolled in. In truth, the sonic innovation on display is overstated: the cues Miguel takes from Prince in particular, from the Linn drum rhythm of ‘Party Life’ to the sweat-soaked rock balladeering of ‘Arch & Point’, aren’t particularly improved by being filtered through slight hazy reverb that one is never quite sure is intentional, or just a poor mastering job.

Nonetheless, the highlights of the EPs find Miguel’s risks paying off remarkably well. In particular, on ‘Arch & Point’ and ‘…All’, from Volume 2, the palpable, physical effort with which he pushes himself result in magnificent, all-consuming music. The skin-tingling desire that overwhelms the former, combined with the tension of the track’s thrumming guitar, is reminiscent in a sideways fashion of Bruce Springsteen’s ‘I’m On Fire’; and while the cultural-aspirational pretensions of Miguel’s new art dealer shtick can seem overdone, the sheer impassioned, conflicted gusto of ‘…All’  means that any suspicious defenses are swept clean away as he promises to “put you on this art shit…you know, smart shit”.

Elsewhere, what’s perhaps surprising about this set of three-track EPs is that, despite the format, all are somewhat hit-or-miss. Volume 1 contains the irresistible ‘Gravity’, all zipping funk bassline and starburst synths framing rose-tinted romance (“Two hearts hung among the heavens / You and I were destined / to collide / I’m open wide”), the startlingly brief cloud of pure feeling that is ‘Adorn’, and the underwhelming ‘That I Do’, big on grandiose synth washes and small on actual song. Miguel’s foray into social issues on Volume 3 pays off on ‘Party Life’, but less so on the try-hard ‘Candles In The Sun, Blowin’ In The Wind’, all serious-faced news samples and lyrical quotes of William DeVaughn and Biggie. Volume 2 undercuts its two masterpieces with ‘Broads’, which sounds like a joke about lazy lyrical tropes with no particular punchline. Nonetheless, Miguel has done enough to warrant attention.