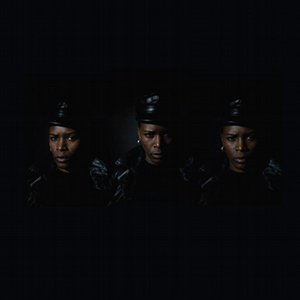 Like probably the majority of collaborative ‘band’ efforts, both Shannon Funchess and Bruno Cavellio have their own histories in previous projects; Cavellio as producer behind synth pop outfit The Dreamies and Funchess having provided guest vocals for a host of talents including Teengirl Fantasy, Telepathe, TV On The Radio, !!! and Ford & Lopatin. However, in Light Asylum they appear to have bonded in an astonishing meeting of minds. Light Asylum is their self-titled debut album proper after the release of 2010’s ‘In Tension’ EP, this and a host of exhilarating live shows having sent ears justifiably whipping in their direction instantly. It is safe to say that this release is a step from strength to strength.

Light Asylum’s style primarily updates ’80s industrial, synth-punk and No Wave influences, whipping them into a passionate, contemporary frenzy. Certain key references remain – such as the slapback delay on vocals, pulsing step basses and march rhythms – but Light Asylum transcend homage and make these hallmarks their own.

Indeed, Light Asylum has all the studio attention of Nine Inch Nails, or Drew Daniel’s superb hardcore-punk-meets-gay-club-rave cover album Do You Want New Wave, Or Do You Want The Soft Pink Truth? Their production values are just as highly polished, injecting a cleanliness to the recordings that, somehow, does not weaken their impact. The key to their success is therefore most likely down to a careful balancing and judgment of parts within – undeniably – expertly written songs.

This means that an entire album largely made of variations on concrete-solid Motorik rhythms, simple, razor sharp synths and vocals never once sounds formulaic. So while ‘At Will’ applies a simple, gnarly drum box variation on a typical rock beat, an elastic, nauseous bass is fitted beneath that transforms it entirely. ‘Sins of The Flesh’ pins long keyboard horn melodies to erratic accents in its rigid pulse. ‘End of Days’ thumps out a tough Euro beat and synth bass, but adds detuned electronic cowbells and a wildly pleasant square wave melody over the top. Even where things could easily fall apart and be seen as too referential – the computer-game pogo-punk of ‘IPC’, for instance, or the rhythmic 80s keyboard brass and soaring vocals of ‘A Certain Person’ – Light Asylum’s musical prowess completely saves the result.

Funchess’ voice also deserves its own special mention; a Grace Jones-like, commanding, dominating presence in every track. Exploring an incredible range, from baritone to soprano, she brings out drama rivaled only by the operatic. And yet she does not subscribe to anything but necessity; indeed, the low, throaty, anxiously earnest delivery on the ballad ‘Angel Tongue’ really needs to be heard to be believed in all its intriguing glory.

Almost overwhelming in places, and certainly distinct, Light Asylum is, quite simply, a brilliant album from musicians who deserve immense respect.