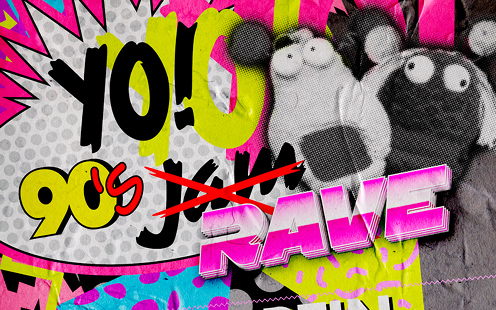 As exercises in nostalgia go, they don’t come much more twinkly-eyed than yOyOyO.

Following on from their Yo! 90s Dance Jam night, the promoters have assembled a night of throwback rave. On June 30 at a secret East London location, a host of classic house heroes will be touching down for a night of revivalist fun of the highest order.

San Francisco’s Doc Martin sits at the crest of the bill. The house bigwig has been spinning since the mid 80s, and was a major player in the San Fran warehouse scene. His (frequently lengthy) sets tilt from deep to acid to tribal, and there’ll no doubt be plenty of well-thumbed classics thrown in for good measure too.

Fingers Inc. vocalist Robert Owens will also be touching down. Alongside Larry Heard, Owens released some of early house music’s most enduring bangers (‘I’ll Be Your Friend’, ‘You’re Mine’ and ‘It’s Over’ being the biggest keepers). Having released under his own name on 4th & B’way, Owens has since collaborated with the likes of London Elektricity, Coldcut and Photek. Owens will be presenting a live PA of all his Nineties hits.

Soulful house duo The Martinez Brothers will be hopping over from The Bronx to offer a somewhat more youthful perspective. Despite having been in prams and booties during the heyday of 90s house, the pair are well-schooled in the classics. A host of top secret guests will also be stopping by, whistles at the ready.