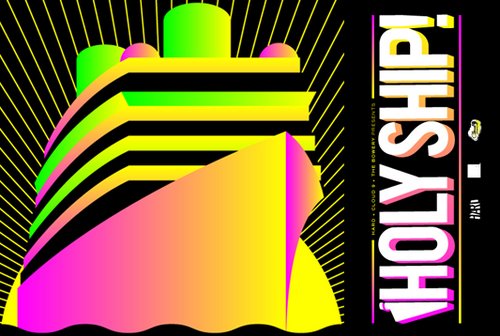 Remember Holy Ship, the rave cruise that ran aground?

Well, it’s back. And bigger than before. Much, much bigger in fact.

Whereas Holy Ship’s first voyage, which lest we forget, almost ended in tragedy, sported a line-up that read like a who’s who of loud, brash dance music (Skrillex, Fatboy Slim, Rusko, Diplo, Steve Aoki et al – though there was room for the really-quite-good Brodinski and, er, Motley Crue’s Tommy Lee), their 2013 one is a more diverse affair, with Night Slugs’ Girl Unit, L-Vis 1990, Kingdom and Bok Bok, Jackmaster, Claude VonStroke, J Phlip, Eats Everything and more stopping by for sets.

Holy Ship sets off in Florida’s Fort Lauderdale on January 4 and patrols the Caribbean until January 7. For more information, head to their website, and for a taste of what to expect, check out these pictures from the first one.