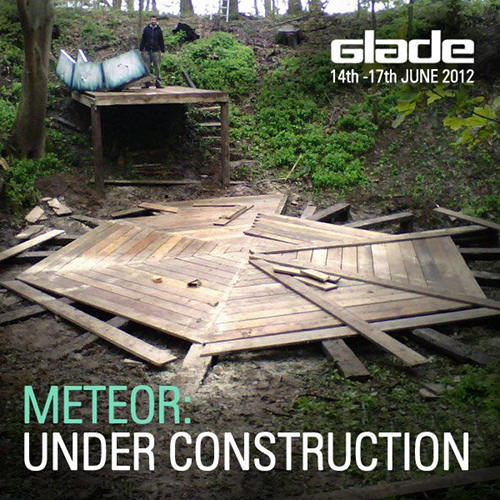 Update: Glade have just released two new promo videos offering an insight into what to expect from the festival. The two clips document the designing and construction process of the festival’s two iconic stages, the Pyromid and the Meteor stages. The former, as described, is a Wicker Man-style construction that will be set ablaze on the last night of the bash; the latter is a curious woodland space with underfloor bass and a UFO DJ booth. The vids are at the bottom of the post (with Sandwell District and Slugabed providing the soundtrack).

The festival, set in the beautiful grounds of Houghton Hall, will see scores of artists playing over 14 stages. A handful of acts have now been announced for the main ‘Pyromid’ stage on Sunday. That name isn’t a typo: once proceedings have been brought to a close, the stage will be spectacularly razed to the ground.

Berghain mainstay Marcel Dettman will be representing Ostgut Ton at the top of the bill for the day. His sets will showcase raw, focused techno at its driving best. Recent Fabric mixee Levon Vincent will nudge things closer to the house end of things. The New York star knows how to work a sun-drenched crowd (check out his six springtime picks for FACT).

Blawan, one of 2011’s boldest upstarts, will also be bringing his clattering take on house and techno. Sandwell District’s Function will be keeping things defiantly minimal with a set of dark, spartan techno. Panorama Bar’s Prosumer will be on on a house/techno tip, and retro-futurist explorer Space Dimension Controller will do his best to take things into the stratosphere.

Glade Festival runs from June 14-17, and weekend tickets are priced at £135. You can view the mammoth line-up in full and pick up tickets on the Glade website.