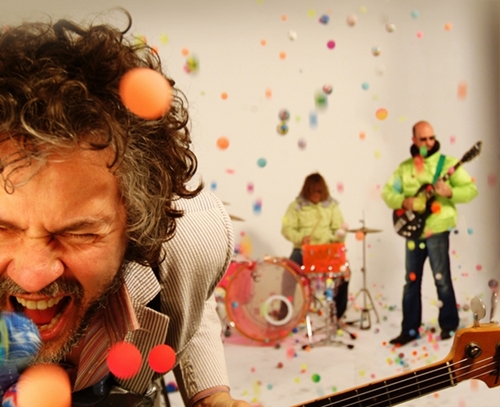 After this week’s display of largesse at the O2, it’s a brave soul that attempts to take on the mighty Jay-Z. Enter The Flaming Lips.

The rapper currently holds the Guinness World Record for the highest number of live shows in 24 hours in multiple cities. According to NME, the screwball psych-poppers are gearing up to beat his record. The Oklahoma combo are hoping to perform eight shows in eight different cities. The concerts will take place on June 27, and will stream live on the O Music Awards website.

Chief Lip Wayne Coyne’s weighed in with some typically cogent words on the subject: “I’ve accepted the attempt at breaking the world record of performing 8 shows in 24 hours. And I’ve explained to the music freaks at MTV, VH1 and CMT that I am not a host. … But, I always liked the way Jerry Lewis would get all sweaty toward the end of his yearly telethon…I don’t remember if I was asked or if I volunteered…But, I’ve accepted the job of, not DRIVING, but commandeering the Magical Mystery Merry Prankster bus.”

Jay-Z managed seven shows in seven cities in 2006. We imagine that the rap Goliath won’t be too sore about these plucky Davids – he’s far too busy pulling together his Made In America festival. Jay-Z has confirmed the first acts for this bill: Pearl Jam, Odd Future, Maybach Music Group, Janelle Monae and Dirty Projectors all make the cut. Other acts include Santigold, Passion Pit, Passion Pit, Calvin Harris and Skrillex. Jay-Z, of course, will headline.