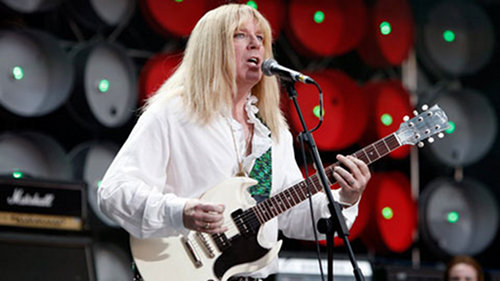 Actor Michael McKean, best known as conceited lead singer David St. Hubbins in This Is Spinal Tap, has had a very close shave.

The Washington Post reports that the actor was hit by a car in Manhattan on Wednesday. The 64 year old sustained a broken leg, facial lacerations and other injuries. Contrary to reports earlier today that McKean was in a critical condition, the actor has been tweeting messages of thanks for the online support he’s received: “Lucky man: best wife, great kids, awesome docs and nurses, priceless friends; a little overwhelmed by the sweet tweets. Love all y’all.”

1984’s This Is Spinal Tap, which follows the fortunes of an ailing glam rock band, remains empirically the greatest music-related comedy film ever made, and we won’t hear otherwise. The accompanying soundtrack album is a delightful set of absurd wig-outs and brilliantly facile singalongs. Here’s hoping to a speedy recovery.