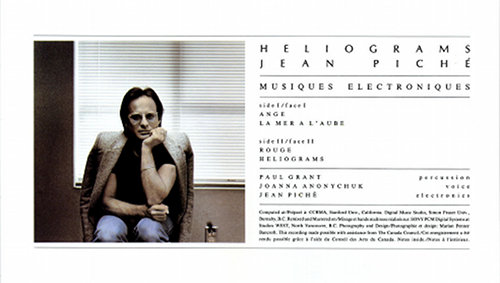 An immersive video has emerged for a particularly impressive mid-Eighties synthesizer relic.

Jean Piché’s 1982 Heliograms LP is about to get the reissue treatment. The long slept-on LP was cobbled together as Piché studied electroacoustic and computer music at Vancouver’s Simon Fraser University. Oklahoma label Digitalis have now elected to reissue the LP, remastered from the original tapes and pressed at Berlin’s Dubplates & Mastering.

No Pain In Pop are streaming a video of tracks ‘Rouge’ and ‘Ange’. You’ll want to set aside some time for the 18 minute clip, a psychotropic rush of strobing slogans and iridescent squares. The second movement of the video is especially immersive: neurones snake through some algae-green murk, and pinpoints of light flash on and off beguilingly. NSFW, in the sense that entering a quasi-spiritual trance might do some serious damage to your productivity.