“A kind of best of” lo-fi godfather R. Stevie Moore to be released on Tim Burgess’s label 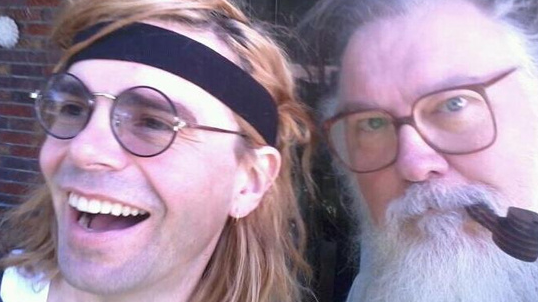 It’s been good to see R. Stevie Moore recently getting some wider recognition beyond the fervent micro-cult that’s long surrounded him.

The generously bearded “godfather of lo-fi”, has been acknowledged as an inspiration by a significant number of DIY artists, among them Guided By Voices and Apples In Stereo, but there’s been a swell of appreciation of late, led by the likes of John Maus, MGMT, The Charlatans’ Tim Burgess (pictured above with Moore) and Ariel Pink – the latter has even compiled an official, super-limited cassette of his favourite recordings by the Nashville native (Ariel Pink’s Picks Vol.1, released 2011) and collaborated with him on this year’s Klu Klux Glam.

Tim Burgess’s O Genesis label, having released a 7″ single for Record Store Day on which Moore and The Vaccines covered songs by each other, has put together a Moore compilation entitled Lo Fi Hi Fives: A Kind of Best Of. The tracklist is still under wraps, but we do know it will be released on vinyl and CD around June 8. More information we have it.