Saint Etienne: Words and Music by… 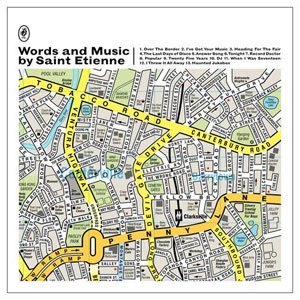 Have you ever visited a furniture store that needs to play the least challenging, least offensive, least provocative music possible so as not to give the impression of catering to a particular age or social group? Something to provide an audible wallpaper but not disrupt anyone’s decisions to spend money? Can you see where this is going?

Like the demo for a piece of mid-’90s music production software, Words and Music by St Etienne is a dirge of acoustic guitars, awful synthesizers worthy of presets and a rhythm section straight from a Tune A Day drum tutorial. It is unfortunate too, but really needs to be specifically mentioned, that Sarah Cracknell’s lyrics throughout the album are also particularly bad. As her posh faux-American Kylie Minogue accent consistently drops into, simply, a posh English accent, the songs are full of consistently embarrassing, cringe-inducing imagery and sentiments.

As if to signal this, the album starts with ‘Over The Border’, a largely spoken word number worthy of the most boring Enid Blyton story tape ever created; perhaps The Famous Five Revisited: A Puberty of Listening to Music and Reading Pop Magazines, Recounted In Unbearable Detail. ‘When I was 10 I wanted to explore the world. There were these older kids at school who’d gone all the way to Somerset, just to see Peter Gabriel’s house. Peter Gabriel from Genesis.’ Yes, really.

It is a shame to be forced into drawing such distinct, ageist categorisation, but Words and Music by St Etienne really brings it on itself, and the result is totally vapid. ‘When I was 17’ contains the motherly wistfulness of ‘ When I was 17, I thought we knew everything…no responsibility, endless possibility…’ and it certainly makes the listener feel 17 again. However, this is only because it’s painfully reminiscent of being cornered by your best mate’s hippy-ish mum the morning after a heavy night out, listening to her discuss her youth as she cheerfully scrubs your vomit from her sofa and waves away your apologies.

There’s no escaping it either; ’25 Years’ is Goldfrapp with all traces of sex, lust and luridness replaced with the preoccupations of a couple from Location, Location, Location. ‘Popular’ is apparently about a thirty-something getting over a relationship by visiting trendy wine bars – a relationship that, if the track’s character is anything to go by, must have been built solely upon a mutual enjoyment of Pilates to begin with. ‘DJ’ compounds the problem by sounding like it was written by the quiz machine of the Wetherspoon’s the narrator invariably ended up in.  All of the tracks have something about them that makes the prospect of aging pretty depressing.

‘I Threw It All Away’ offers the only respite in its surprising use of baroque recorders, which are quite pretty. It is a shame to think that this is because the trio are now probably just spending more time at country fayres these days, but at least offers a way out; perhaps for the next record St Etienne could drop everything in favour of hitting record and going on some psych-folk bender, inspired by the terror that they have hit an age where they are beginning to enjoy watching morris dancers.

Until then, there is a certain irony to the fact that St Etienne could make a lot of money creating this style of music professionally for functional purposes; soundtracks for holiday TV programs, DVD menu screens, cable infomercials and shopping channels, etc. Indeed, judging by the sound of this album, it’s possibly something they have been doing as a living for years now, which is totally fine. But its artistic merit is slim to none, having all the finesse and aspiration of a college music technology course portfolio. If this is the kind of future current producers have to look forward to from themselves in twenty years time, then it might be worth getting good at watercolours and yoga right now. Frankly, Words and Music by St Etienne would have been better without either. Sorry guys.