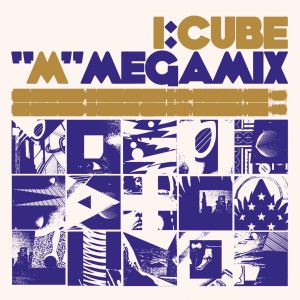 The eternal question of how to make a great dance album. It’s plagued great singles artists for years, and often, has been bypassed by simply not making a dance album at all – obvious recent examples being Burial’s Untrue, as much an ambient pop record as it is a garage record, and Actress’s Splazsh, where a techno pulse is implied as much as it’s actually present. But here, almost completely out of left field, is the best dance album I’ve heard all year – and it’s very much a dance album.

French veteran I:Cube’s “M” Megamix, despite its title, isn’t a mix CD. It’s an album of original productions that aren’t mixed, but do on average last around two minutes, and it changes tracks with the timing of an expert DJ set. For years, house and techno has been full of bullshit about albums taking you on journeys, and 99% of those journeys are predictable and boring – you get a beatless intro, then three six-minute tracks that follow the standard build / breakdown / rebuild formula, then a vocal track, then another three of those standard ones, then a big breakbeat-y one to close. If that’s a journey, it’s a car ride to Butlins with a couple of stops at a service station, i.e. a journey that nobody in their right fucking mind wants to go on. “M” Megamix is high-octane, and full of dynamic twists, turns and moments that come out of nowhere and simply knock you for six. It’s like an early Dillinger Escape Plan album, done techno. It’s a journey that grips you, shocks you, and stays with you.

“M” Megamix is 24 tracks long, and the way that these tracks interact and fall into each other, with no boring intros and clotted breakdowns, is what makes the whole experience of this record so impactful. Many of them, however, stand out as worthy of individual praise: ‘Transparent Sea Creatures’ rolls out heavily reverberated breakbeats – think Shed piloting a submarine – before inverting entirely into a spiky arpeggiated amoeba of a beat that sounds like how Zomby might soundtrack this scene. ‘Transpiration’ bangs out a piano riff heavier than God over sawn-off kicks, while ‘In Alpha’ takes sun-wilted guitar and shapes it into a driving, dad-friendly house track that would sit nicely between Ducktails and Fleetwood Mac in your CD changer for any drive up and down America’s West Coast.

If you need more examples, then there’s ‘Y.O.U.R.O.C.K.’, an acid house workout that – unlike 90% of music that’s been described as acid in the last five years – is actually tweaked-out, hypnotic and psychedelic. ‘Makossa Suspens’ is tear-out fidget filtered until it’s a complete negative of itself, while the double salvo of ‘Le Rocher Aux Singes’ and ‘Club Miniature’, on the album’s second half, build up a take on disco-inflected sunset house that’s just so much better than anything you’re likely to hear in Ibiza this season it’s unreal. If there’s a common theme emerging here, it’s that “M” Megamix‘s party trick is taking already popular styles and bettering the majority of their modern purveyors, and I can see why that would put people off. There’s very little that’s new about the music here, but what does seem new, or certainly fresh, is the way it’s put together – it’s pop music every bit as direct as araabMUZIK’s trance-hop minecart ride Electronic Dream, but produced with the panache of someone who’s been in the game since the 1990s.

If you ever wanted a house or techno album as endlessly listenable, as varied, assured and as good value for money as Madvillain’s 2004 hip-hop classic Madvillainy, then your wish has been fulfilled. Fuck intros, let’s dance.