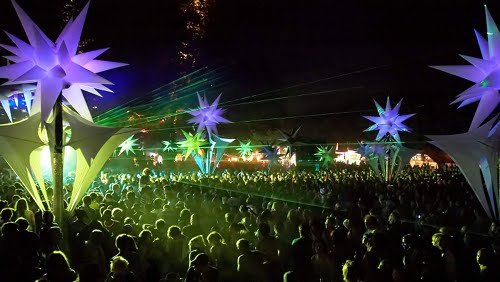 Following on from a few additions earlier this month, Glade Festival have now released the line-up for their 2012 event in full.

In June, Norfolk’s picturesque Houghton Hall plays host to an enormous celebration of contemporary dance music in its myriad forms. Over fourteen stages, Glade will showcase an exhaustive list of artists from across the electronic spectrum. The Overkill arena features a host of FACT favourites, including the masterful Kuedo, Tectonic mainstay Pinch, footwork don DJ Rashad and the ever-elegant Daedelus. Also featuring on the bill are Jimmy Edgar, Boddika, Addison Groove and Om Unit.

The Pyromid stage, meanwhile, plays host to the Alternative Brit Award winning Mosca. Adventurous producer Appleblim and the lively Eats Eveything will also be present and correct, as will house music eccentric West Norwood Cassette Library. Elsewhere, the Meteor area has an eclectic roster of artists on board: expect to see Slugabed, Kutmah, Zen Death Squad and Akira Kiteshi grace the same stage over the course of the weekend.

The new acts join a bill which already includes Cocoon overlord Sven Vath, Andy C, Vitalic and Foreign Beggars. Glade Festival runs from June 14-17, and weekend tickets are priced at £135. You can view the mammoth line-up in full and pick up tickets on the Glade website.

UPDATE: we’ve got two pairs of tickets to give away for Glade 2012. To enter the draw, email your name and the words ‘Glade 2012’ to competitions@thevinylfactory.com. Our winners will be notified on or before June 8.