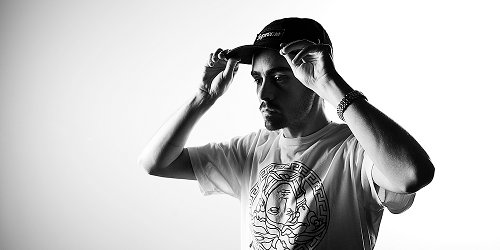 Full details of Oneman’s mix CD for Fabric have been revealed.

The South London DJ’s contribution to the series will be released on July 16, and marks his second official mix CD following a 2010 effort for Rinse’s series.

Oneman’s been one of the capital’s leading lights behind the decks for several years now – making a name for himself with long, meticulous blends of garage and dubstep at raves like House Party (a sporadic series of warehouse parties that predate his current Standard Place club night), and winning a show on leading London station Rinse FM. In recent years, he’s changed his style to a quicker, more hip-hop-indebted method of DJing, frequently switching between genres and tempos, but FabricLive 64 appears to be a more straight-up, house tempo affair, with classic material from Dem 2, Groove Chronicles, Steve Gurley and Ed Case rubbing shoulders with recent gear from Joy Orbison, Thefft, Boddika and Pearson Sound.

Talking to Fabric for the CD’s press release, Oneman explains that he “wanted the mix to primarily be a representation of what I would typically play at fabric in current terms, so bearing that in mind I decided to draw on a lot of new house crossover stuff. The beginning of the mix is kind of a throwback to 2010, where I felt this UK Funky sound really started developing into another darker strand of UK dance music. The rest is really a mix of 128-134bpm music through the years; there’s some old Locked On garage classics in there too… I never really think out these things too much, it just has to make sense when I listen back to it.”

He also talks a little about his story to date as a DJ:

“I think my first real experience with music was when I was about 11, with Kiss Smooth Grooves ’97 – mainly CD2. It came out during my first year at secondary school and there was a run of tracks on that CD that went:

These four tracks changed everything about music for me, forever. It wasn’t like hip hop was a new experience to me at all; I think it was the calibre of those 4 tracks on a CD like a Kiss FM comp, among bloody Des’ree and The Lighthouse Family, which really blew me away!

“Radio was always an opportunity I missed having grown up with garage as an early to mid teen. I heard so many stories at my school of kids going for trial sets at pirates in Battersea, coming out and having their records taken at the bottom of the block and I really loved my records so I didn’t ever take that risk! By the time I hit 18 I wasn’t willing to let any more chances slip so I emailed Heny G (React FM Manager) and sent him a guest slot I’d been on over at SubFM (one of the first internet stations) and he gave me a Sunday evening show. I started to do those shows with Asbo, my MC who still does my Rinse shows now. It was a cool little community down at React and initially I didn’t want to leave, but it kind of fell apart quickly so I took Sarah Souljah’s offer to join Rinse more seriously.”