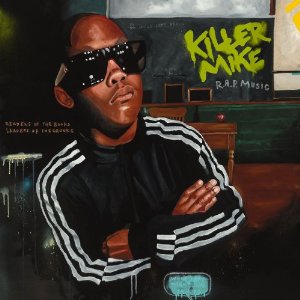 In recent years, some of the ramifications of hip-hop’s increasingly fragile position vis-à-vis dominant commercial trends have been somewhat unexpected. For one, there’s the pattern of the best full-length hip-hop LPs of each year coming not from the genre’s superstars, trapped in their gilded cages, or hungry up-and-comers, too often falling awkwardly between two stools in trying to cross over from the underground to who-knows-what. Rather, it’s been low-key old dudes with little to lose and a lot of ideas to give, from DJ Quik & Kurupt (2009′s BlaQKout) to E-40 (2011’s Revenue Retrievin’ series) to, arguably, Big Boi (finally receiving acclaim on a par with Outkast partner André 3000 with 2010’s Sir Lucious Left Foot album). Now, it’s the turn of Atlanta’s Killer Mike.

R.A.P. Music is Mike’s sixth album, and it’s undeniable that the increased critical interest in it compared to its predecessors is down to the involvement of indie favourite El-P, the album’s producer. Dubious motivation aside, though, it’s an ear-catching work, more immediate than anything Killer Mike has done since his brief commercial moment of glory in 2003, ‘A.D.I.D.A.S.’: its hooks are tight, its message is concise, its beats are in fact far more interesting and enjoyable than one might expect from the usually worthily aggressive El-P. Clattering percussion is allied to a sweet, summer-baked hook on ‘Untitled’, and neither detract from the track’s warning menace; ‘Go!’ oscillates wildly as Mike rat-a-tats double-time braggadocio; the guitar lick that decorates ‘Jojo’s Chillin’ is as irresistibly poppy a sound as either man has put their name to. Even when the album moves into more self-consciously aggressive, dark territory – ‘Butane (Champion’s Anthem)’, ‘Anywhere But Here’ – it never sacrifices groove for difficulty, in contrast to El-P’s own recent Cancer 4 Cure effort.

While the political aspect of the record – R.A.P. stands for Rebellious African People – may be overstated, Killer Mike can be forgiven for veering too close to standard hip-hop conspiracy theory territory when it’s as delivered with such passion as on ‘Reagan’. But he’s on firmer territory when masterfully unfolding character narratives – ‘Jojo’s Chillin’, ‘Willie Burke Sherwood’ – or simply staking his claim to his locality with no nonsense and a banging beat, as on lead single ‘Big Beast’. In a time when debates over what constitutes “real” hip-hop are becoming ever more tedious, defending the old school just because they cleave to traditional values seems reactionary; instead, what Killer Mike should be praised for here is making an album that’s shorn of any extraneous nonsense and simply goes hard – regardless of the style he does it in.